Rusanov ured: The original hotel Bellevue was built in 1967 based on the design of a distinguished Croatian architect Zdravko Bregovac. The hotel was built and furnished in accordance with the demands of the time, but it did not fit into the concept of the new owner who perceived it as an exclusive place for relaxation and vacations. The reconstruction and the extension of the existing hotel were started in the fall of 2013, with the aim of improving the standard of the service with regard to the spatial capacities and the equipment. The Bellevue Hotel experienced a thorough change within a very tight deadline; all projects and works were completed in the period of mere seven months.

The emphasis on the main axis of the hotel which leads to the sea has been additionally supported by the construction of a wide stone access staircase descending to the coastal promenade of Čikat Bay. On the other side of the hotel, the entrance is emphasized by a new spacious and voluminous eaves. The main public facilities of the hotel are located at the entrance level: the reception, the lobby, stores, a three-part congress hall (with the maximum capacity of 360 seats), two smaller meeting halls, a lounge bar and three restaurants of different sizes. Some of the rooms on the first floor have been torn down so the two-storey areas were created in the lobby and the lounge bar, which evokes the feeling of spaciousness, as well as enhances the perception of the vertical axis of the hotel.

▼宽大卷翘的屋檐突出了入口区域  The entrance is emphasized by a new spacious and voluminous eaves.

The basic spatial concept of the hotel, one shaped around the central atrium has been preserved. It has been extended by the construction of a glazed passage which can be fully opened during the summer months, thus becoming a covered atrium area.  The floors of the passage and the atrium terraces have been plated in teak wood and furnished in teak furniture covered with soft cushions. Next to the existing pine trees, orange, lemon and grapefruit trees have been planted in the atrium, as well as other indigenous plants.  The new architectural elements introduced in the shaping of the façade are the expressed whiteness of the surfaces and the use of the horizontal brise-soleil system and shutters to create a dynamic rhythm of the surface.

▼玻璃走廊使空间得以延伸，夏天的时候可以完全打开，这样中庭区域就成了一个有顶篷遮盖并且两侧开敞的空间  The space shaped around the central atrium has been extended by the construction of a glazed passage which can be fully opened during the summer months, thus becoming a covered atrium area.

In the process of designing public areas, the aim was to create a separate identity for each of the individual wholes.  The lobby area floors are covered with terrazzo tiles, the restaurant and the lounge area with matt oak parquet of large dimensions, while the congress and meeting facilities are carpeted. The columns in the lobby have been cladded in Persian travertine, while the reception counter and wall claddings have been done in Indian Apple Veneer. Composite stone consisting of ammonite and fossilized tree from Madagascar has been used for the lining of the wall of a part of the reception area and the wall of the lounge bar which extends over two storeys. Wall claddings of the restaurant have been finished in oak and walnut veneer and the wall claddings in artificial leather should also be mentioned. All equipment and furniture is of high quality and excellent design (by producers such as Poliform, Porada, Poltrona Frau, Cassina, Roda).

The colours are warm and natural, ranging from the dominant colour of sand to chocolate brown, orange and yellow. Sanitary facilities have been coated in slabs of Portoro, Rosso Lepanto, Paonazzo, Rosso Alicante and Arabescato Orobico Rosso marble. The works of painter Tomislav Buntak, which have been exhibited in the lobby, the restaurant and the entrance area of the pool, greatly contribute to the unique atmosphere of respective areas. The terrace, which stretches along the southwest façade, includes the dining areas or areas for rest or relaxation with a drink.

▼大堂展出的画家Tomislav Buntak的艺术作品  The works of painter Tomislav Buntak, which have been exhibited in the lobby, the restaurant and the entrance area of the pool.

The storey located below the entrance level includes the pool facilities, fitness and wellness, as well as a Spa clinic. The walls of the interior pool are covered with the painting done in mosaic tiles. The playful figure in movement encourages the idea of having fun in the water. The authors of the art pieces are Valentina Butumljević, Damjan Roce and Klara Rusan. The interior pool is protected by a glazed dome and the area is furnished with white deck chairs and tables, alongside with comfortable sofas of organic design (produced by Paola Lenti). The area is characterized by the colour white and the richness of natural light.

▼室内游泳池的墙壁上贴着马赛克瓷砖画，画面上有趣的运动人物激发了游泳者花样戏水的想法  The playful figure in movement encourages the idea of having fun in the water.

▼室内游泳池上方覆盖着一个玻璃穹顶  The interior pool is protected by a glazed dome.

The fitness area includes the workout hall (Yoga, Pilates) and the gym with exercise equipment. The spa clinic and the fitness area are connected by a wide communication area with natural lighting provided by a line of roof domes. The domes also house big aquariums which are used as elements of spatial sequences.  The spa zone consists of two parts; the beauty zone with different facilities which provide beauty treatments, as well as massages and relaxation programmes.  The zone was envisioned as a very bright area, which is why white terrazzo was selected for the floor and bright onyx for partition walls. The whiteness and transparency are emphasized by flapping curtains dividing the area. The dark colour of the Spa is in contrast with the whiteness of the zone and includes a line of showers, Finnish sauna (one up to 90°C, the other up to 120°C), Turkish bath, Tepidarium pool with cold water and the relax zone. The dark terazzo is used for the floors; the walls have been cladded with dark red mosaic tiles and the partition onyx walls are in dark tones. The outdoor area in front of the wellness is planned so that the activities can also be done in the exterior; hydromassage bath tubs, deck chairs and massage areas are situated in the exterior area. On the other side of the area there is the exterior Finnish sauna with a cold pool and a hydromassage bath tub.

▼整个空间是敞亮的，隔墙选用了明亮的缟玛瑙石材制成  The zone was envisioned as a very bright area, which is why white terrazzo was selected for the floor and bright onyx for partition walls.

On the first and the second floors which have been preserved, the number of accommodation units has been reduced in order to meet the contemporary standards regarding the size of the hotel room.  The height of the areas has also already been set so the area is relatively low. The two added floors were devised and executed in a way that the accommodation units follow the exterior rim, while the hallway follows the rim of the atrium. All newly designed accommodation units have spacious covered terraces cladded with teak boards. Some accommodation units contain hydromassage bath tubs. 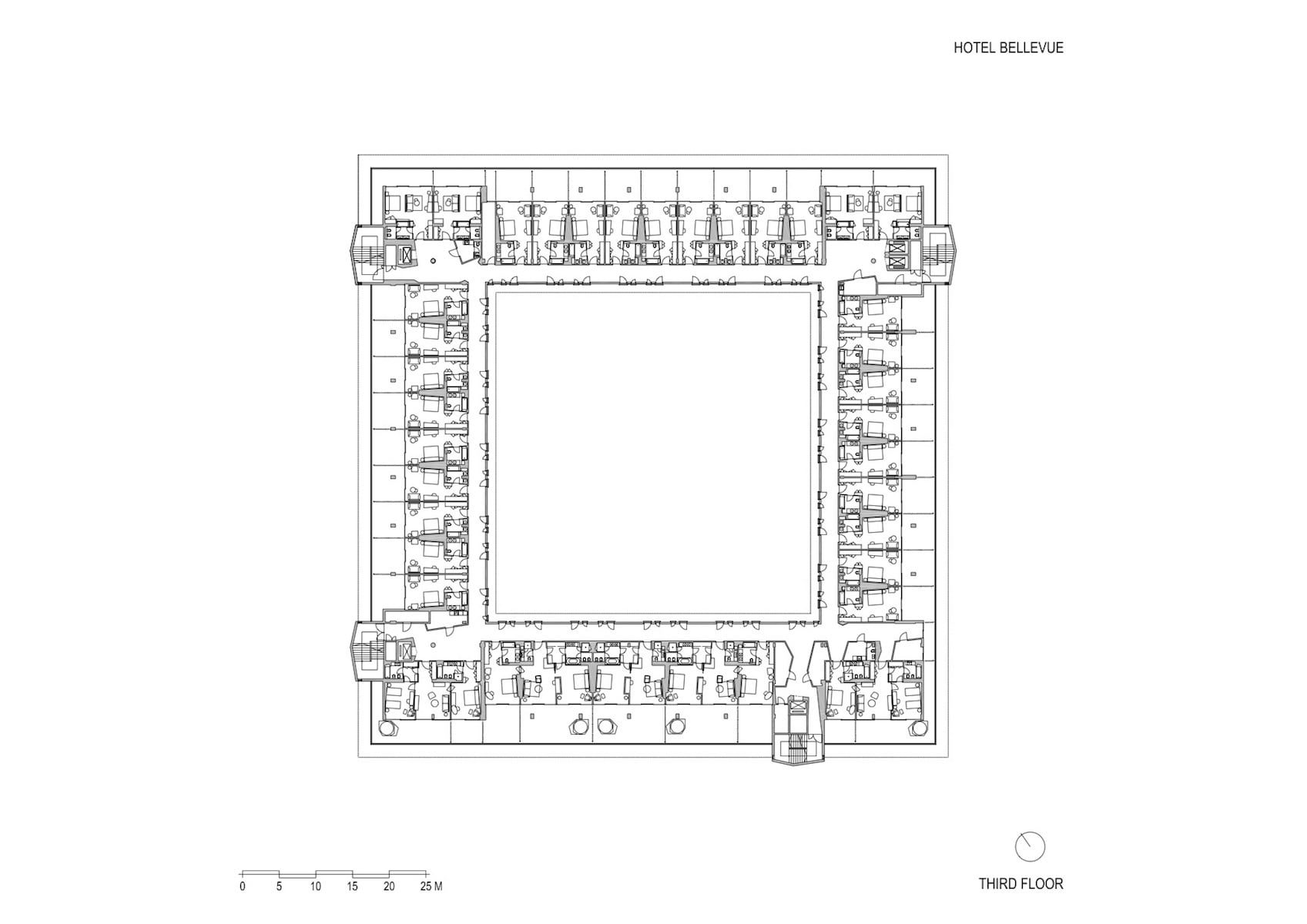