DPJZ: Gaozhen Che Village is located in Dianbai District, Maoming City, Guangdong Province. The red underground stronghold established in the village in the 1940s was one of the most important revolutionary strongholds of the Communist Party of China in western Guangdong at that time, where revolutionary martyrs have left heroic deeds. In recent years, the descendants of the martyrs, Li Hao, who was the former Deputy Secretary-General of The State Council, have donated the underground revolutionary activity sites and nearby plots to the society free of charge as a red education base, and added exhibition halls to meet the needs of commemorating revolutionary traditions and heroic deeds and propagating patriotism.

The new exhibition hall was completed in July 2020. Song Ping, the former member of the Standing Committee of the Political Bureau of the CPC Central Committee and head of the Organization Department, wrote the name of the museum in his own handwriting. It contains a main building and surrounding landscape, funded by the private sector, as a gift for the centenary of the founding of the Communist Party of China. 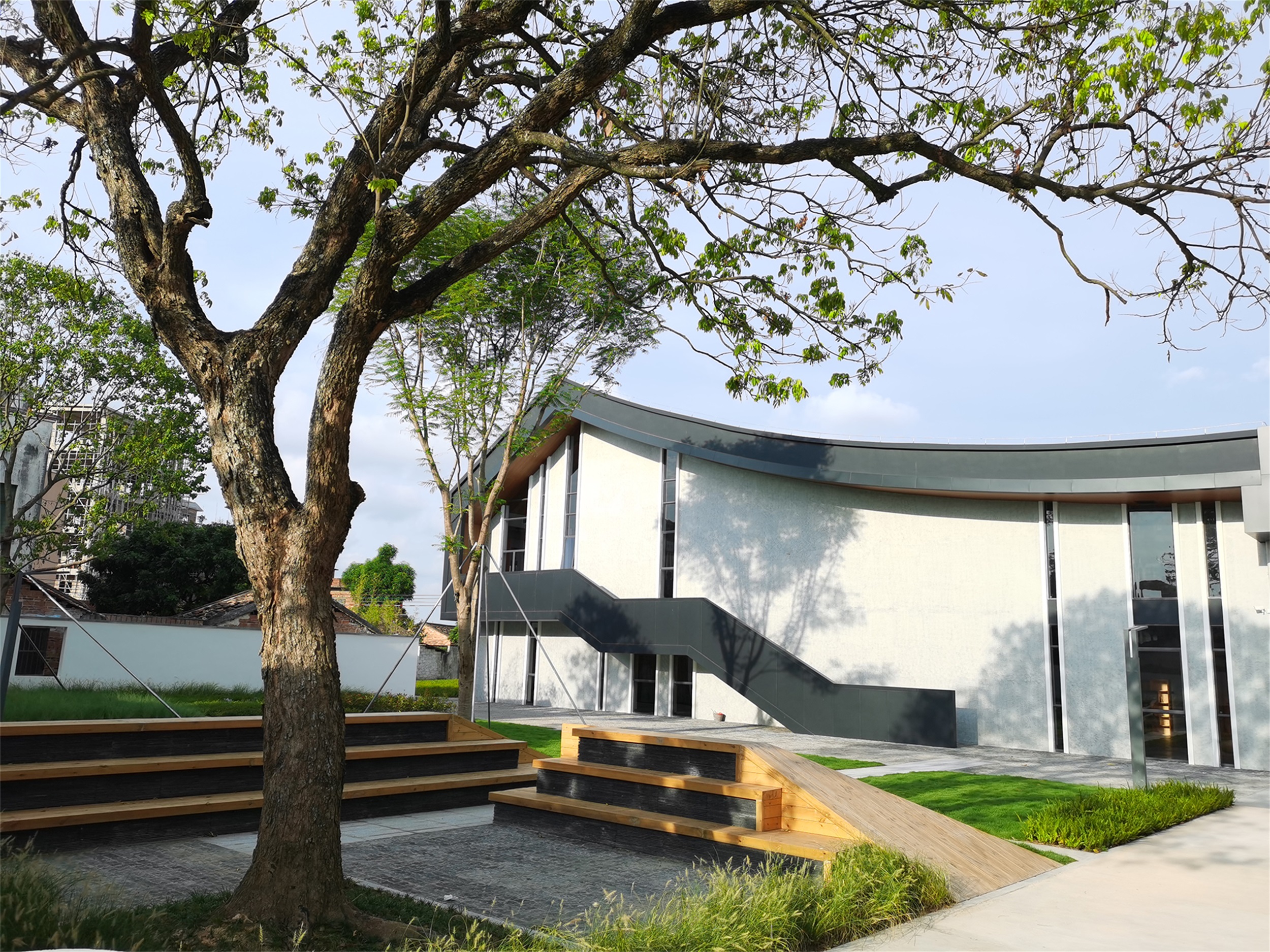 In addition to trying to cope with the irregular plots, the designers have been wondering whether there could be a more intimate representation of the red pavilion than the usual high-and-mighty form? How can its form show and embody the new function and connotation of red architecture and landscape in the new era? The design ultimately led to the following elements:

The traditional Chinese villages represented by ancestral halls and temples are not only the social places of the people, but also the places where the spirits of the villages rest and return. However, all this gradually disintegrated with the urbanization of modern times.

On the occasion of the 100th anniversary of the founding of the Communist Party of China, it is of practical significance to take the red spirit as the core place for the spiritual cohesion of the lost village reconstruction, to better meet the needs of the local population. 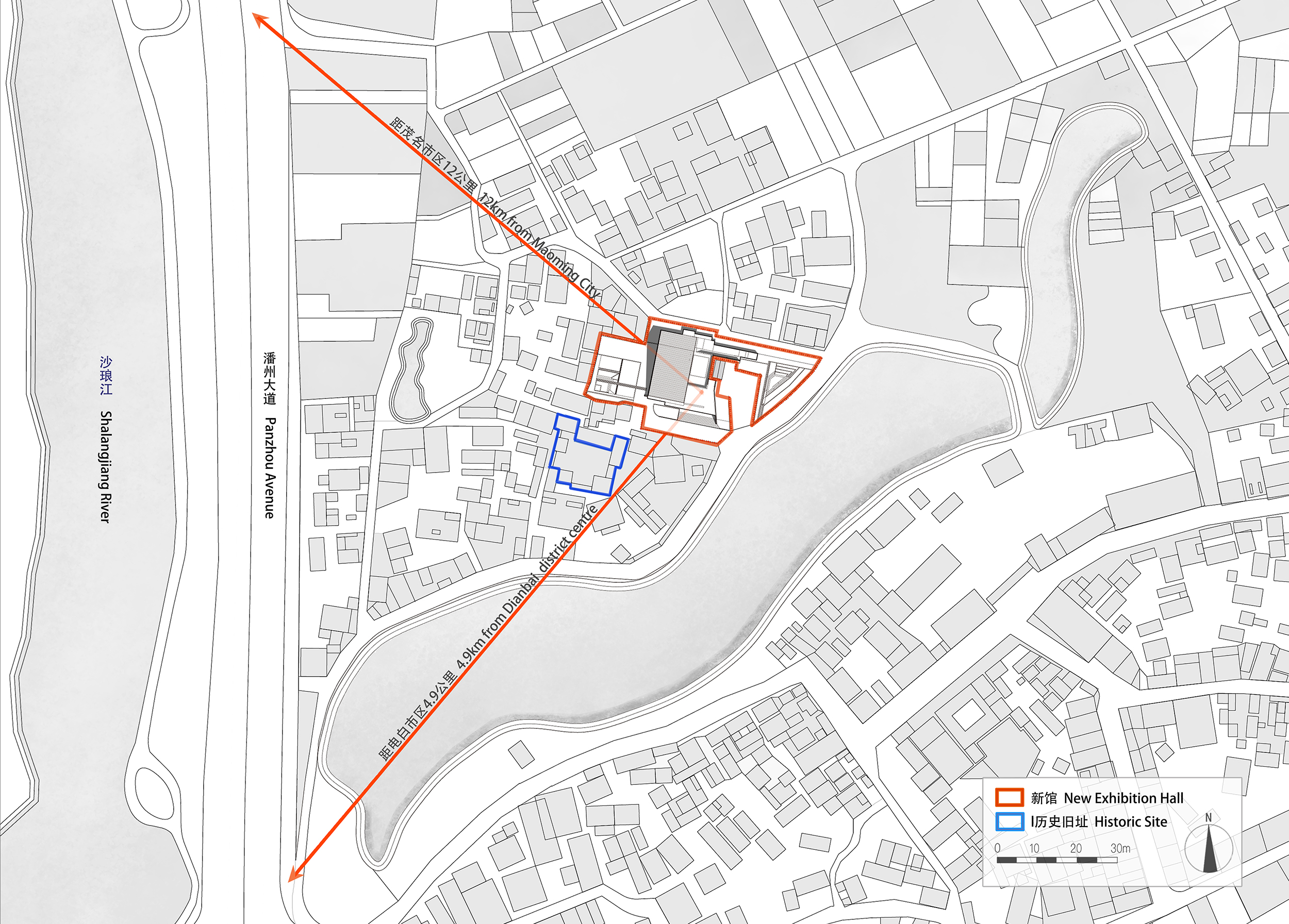 1.以庭院式布局整合割裂的地块 Integrate the Fragmented Plots with a Courtyard Layout

The plot, with an area of 2870 square meters, is close to residential buildings on three sides and faces the village river on the east. The original view is wide, so the southeast has plenty of light and is close to the road, which is the best choice for building orientation, unfortunately, due to the land is too close to the Central, southeast of the existence of “Nail House”, and their messy chicken shed, resulting in land East& West only has about 3.5 meters wide channel connection, the overall irregular shape  The lack of site integrity and the blocking of the optimal orientation of the building are the most serious problems for the plot.

The theme buildings are laid out on the side of the west block, still occupying the center of the plot, and the layout is well-planned to conform to the image of the red theme; the remaining plots of east and west are “settling with the situation”, while the west and east respectively form a square and right-angled triangle terrain landscape. Several scenery walls rise along the “nail house” area to directly block the audiovisual pollution of the chicken shed; combined with the auxiliary rooms, evacuation stairs, and evacuation passages to the north, several “fragmented” architectural elements combine to obtain the atrium space. Due to the formation of the layout of “inner courtyard + exterior landscape”, the east and west are connected by scenery walls and building ramps, but there is a sense of “wind path through the secluded garden”, and there is no sense of fragmentation. 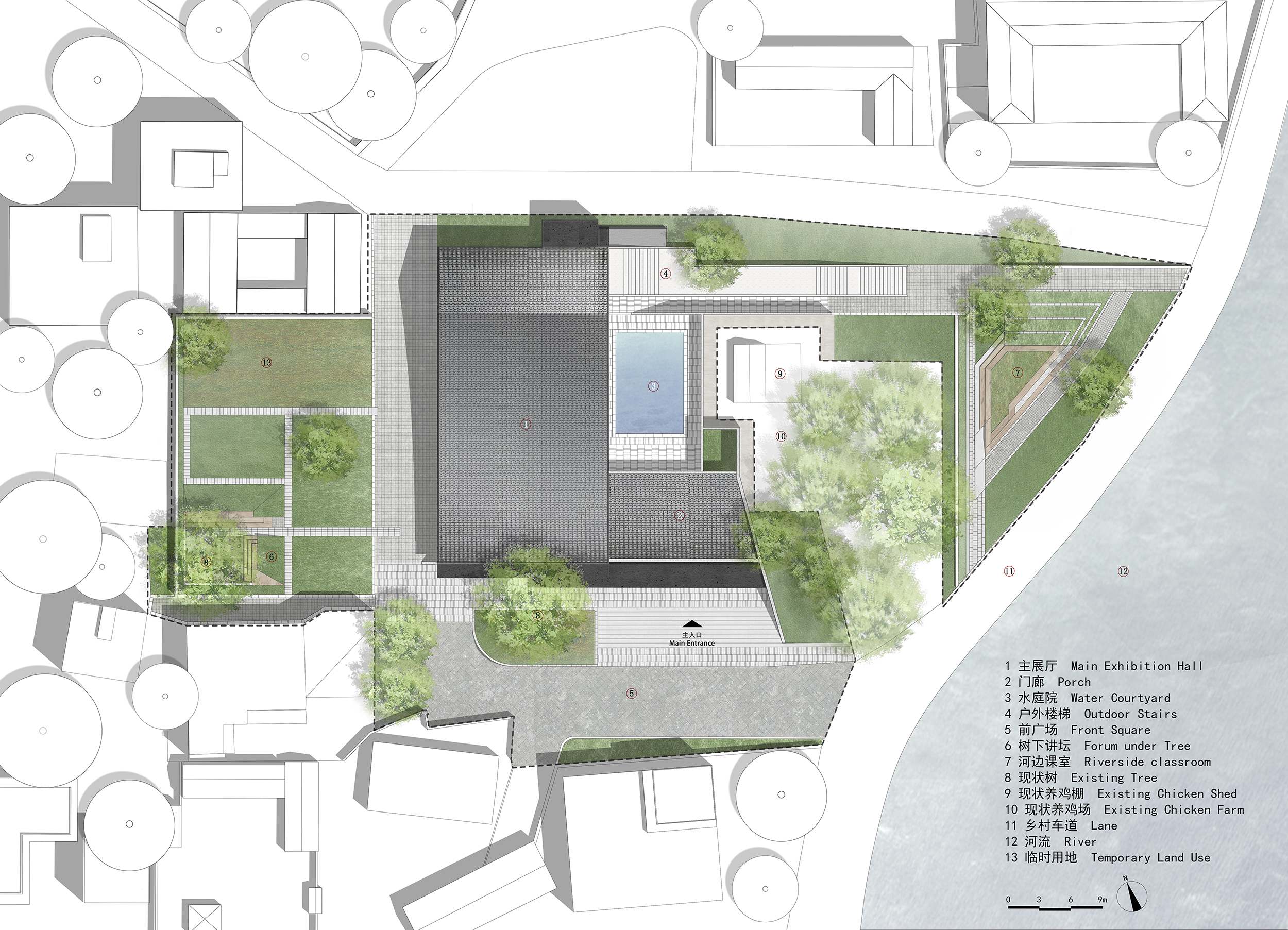 The entrance is still south-facing, combined with the terrain and some retreat to the north, so as to maintain a certain line of sight with the main road of outer riverside; the entrance plane is shaped like a “trumpet”due to the non-orthogonal angle of the entrance scene wall, the “welcoming” posture is very conducive to the formation of the approach from the external road for visitors to provide a certain viewing angle and slowly expand the facade image, so the entrance was blocked before the problem was immediately resolved.

▼入口具有传统建筑的尺度 The entrance has the scale of a traditional building 2.为无序村落肌理确立坐标 To Establish the Coordinates for the Disordered Village Texture

Like many villages along the coast of southern China Today, the village of Chezhen is filled with young and middle-aged laborers seeking work in the cities, while the elderly, children and women stay in the village, hoping and feeling lonely; they love their hometown, but to expect the country to become more like a “city” with the feeling of both love and ambivalence. The contemporary “small villa” has replaced the traditional brick and tile folk house, and disappeared the traditional village’s mark completely.

The Education Base is located in the center of the village, and the building faces south to the water, which is used as the core space of the village. It is close to the main road of the village and is about 20 minutes’ drive from the city, which is convenient for radiating the urban area, thus the new village coordinates are established, and then the village construction in the future is guided.

▼形制呼应土生民居 The shape of building echoes the local dwellings

3.探索庄重而亲民的空间形式 To Explore the Solemn and Civic Space Form

Through the allocation of the building volume, the resulting entrance space has a similar scale to traditional buildings . As a display place of revolutionary tradition, the long awning at the entrance of the exhibition hall combined with the facades made of local Red Stone in Guangdong is not only a theme of “revolutionary tradition commemoration”, but also an echo of the local red folk house tradition; At the same time for the village meetings, festivals with a “sense of ceremony” background, as a carrier of local historical memory . 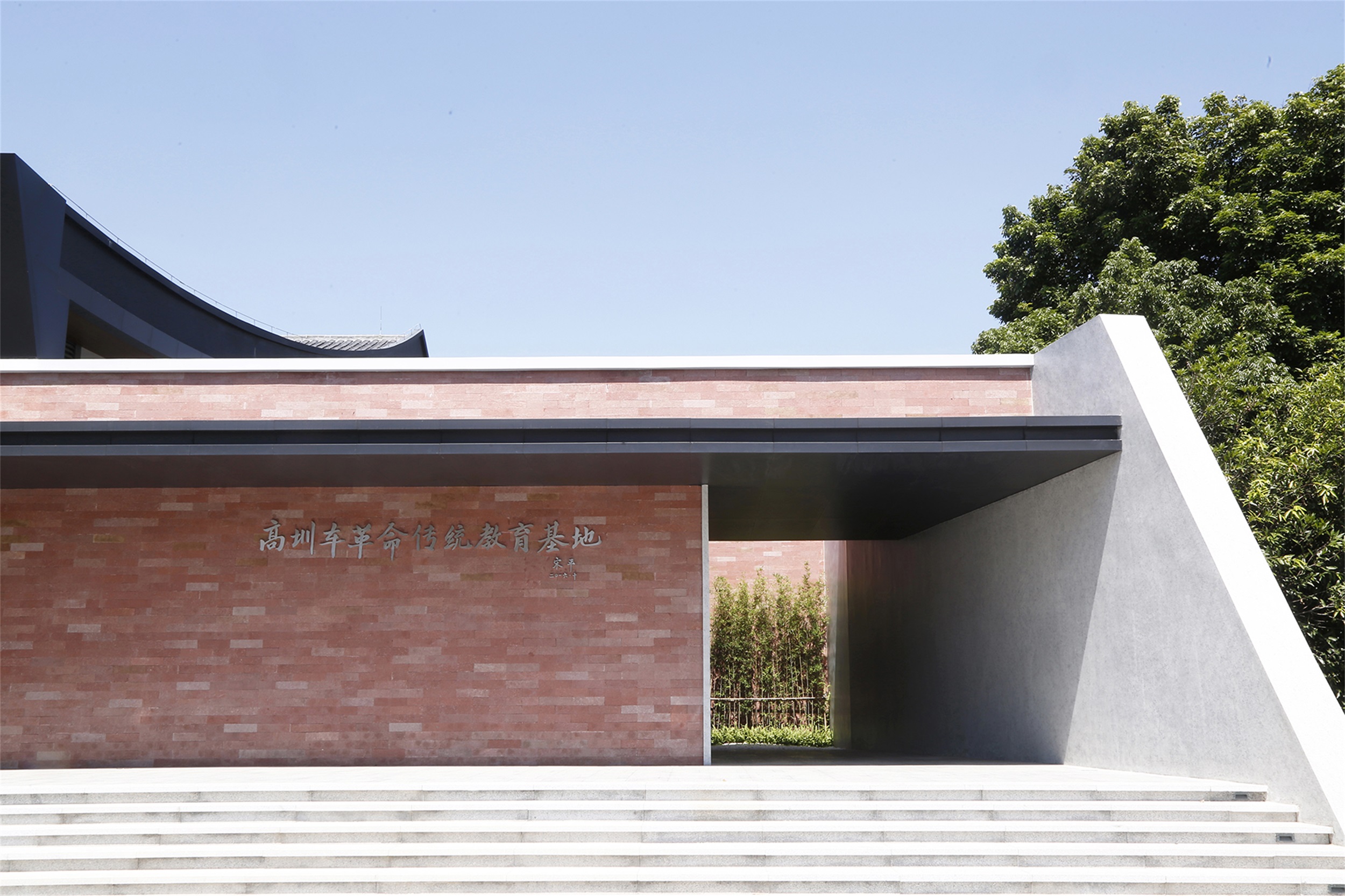 The symmetrical interior space of the central axis continues the commemorative characteristics of traditional ancestral halls and temples that have disappeared . The auxiliary rooms on the north side of the courtyard are decorated with local black shale, giving the entire courtyard a concise and powerful image. All these make the pavilion maintain the sense of solemnity that it should be used for celebration activities; at the same time, the open porch, quiet atrium and independent stairs make the part of the pavilion have a strong openness, which is convenient for the people to come and go freely. 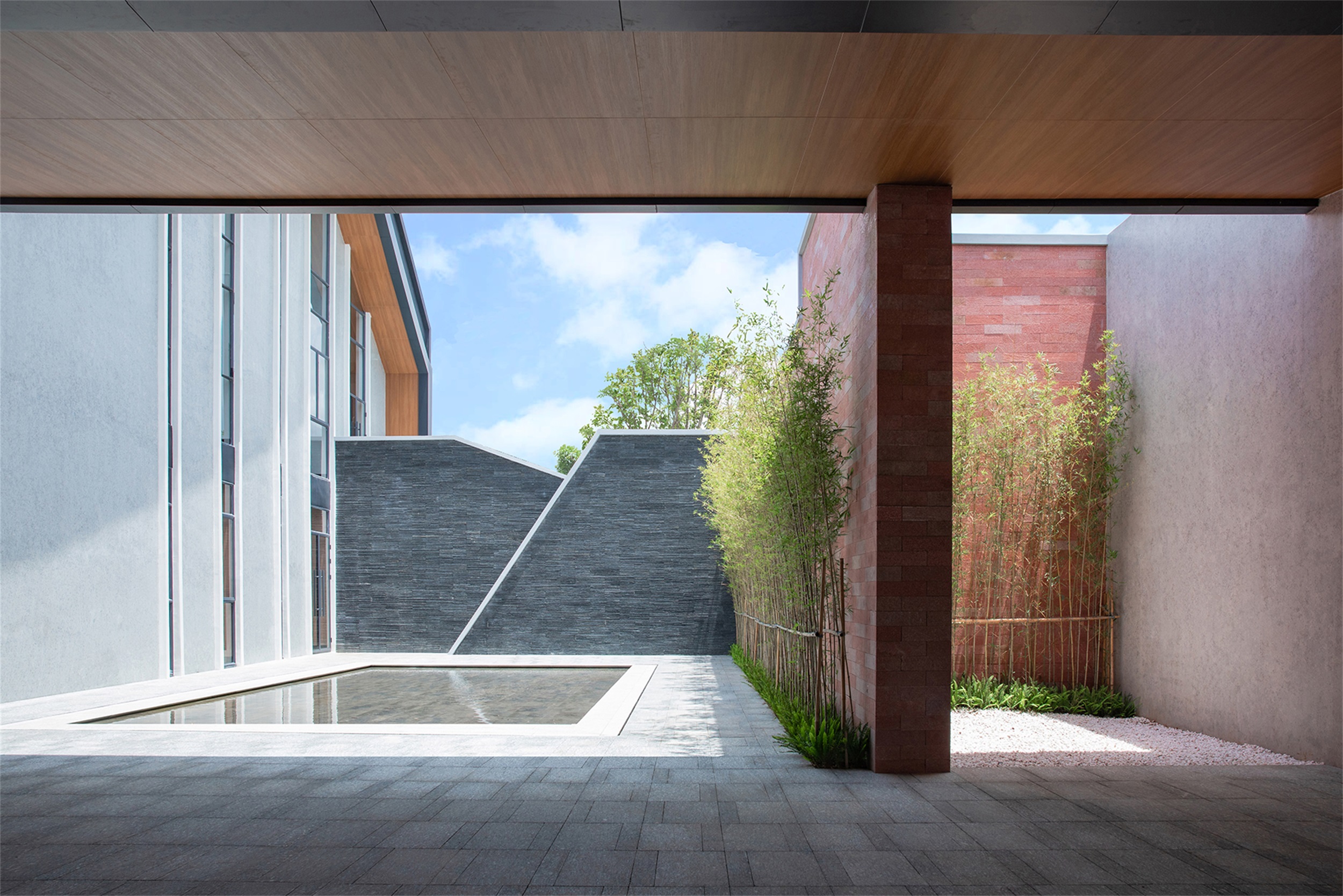 The green spaces on both sides have also abandoned the high walls of the conventional government compound, and have turned from an “inner courtyard” to an “non-boundary” open space. From the actual use effect, the non-closed management part of the exhibition hall and the surrounding landscape are very attractive to residents and have become an important daily social place for them . 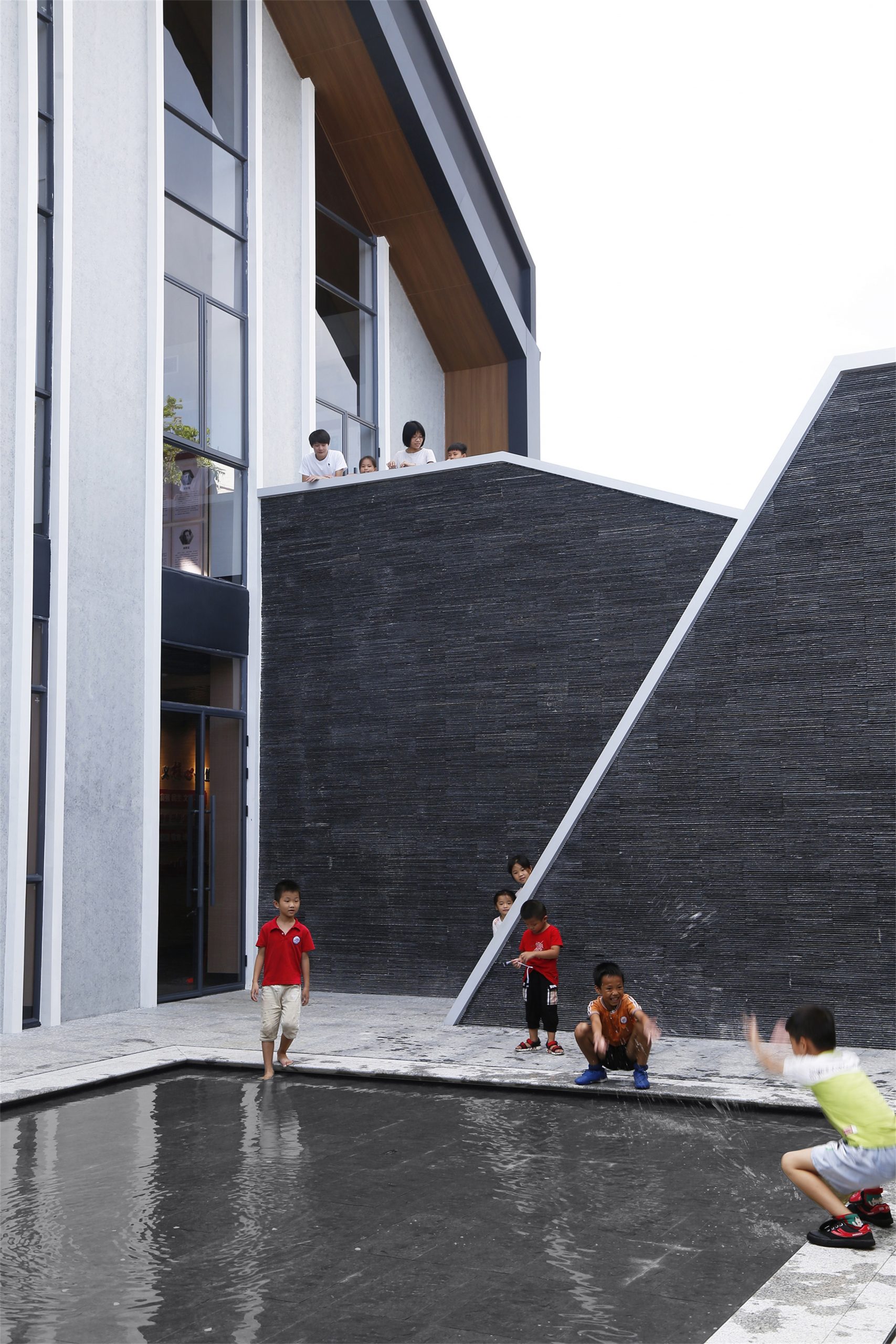 二.寓思想教育于风景｜Putting Ideological Education into the Landscape

Since ancient times, there has been a tradition of integrating education in landscapes in China: such as the creation of rock carvings in the middle of famous mountains and large rivers, or the creation of gardens and scenic spots based on allusions. Visitors come here to learn about the culture and to be inculcated in the scenery and gardens. As an educational base to showcase the local red historical traditions, the architecture and landscape design hopes to convey ideas and education through the beauty of the environment. There is no “title” or “slogan” here, but it is believed that visitors can “feel something” from the space.

▼从庭院外回望建筑 Looking back at the building from the outside courtyard 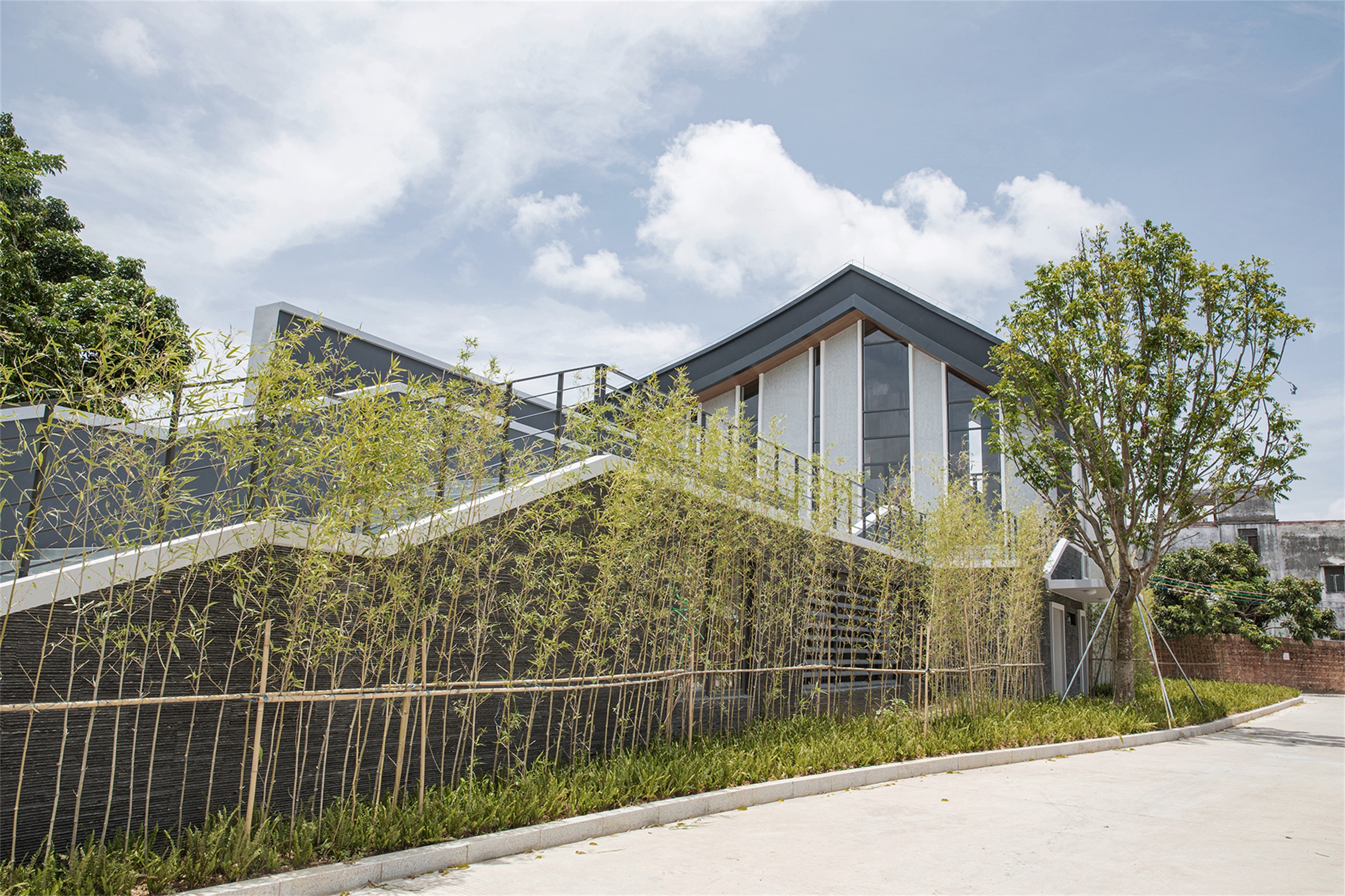 1.“园林式”的空间序列利于感化 The Space Sequence of “Garden Style”is Propitious to Influence

The building unfolds from the door — foyer —to the exhibition hall. The water courtyard has the function of purifying the mood for visitors to adjust their thoughts before the exhibition , and finally arrive at the exhibition hall In the indoor exhibition through the vertical window, the view can reach the “atrium water mirror” or “the forum under the tree”. Vertical windows bring unusual lighting, great ventilation and lighting effects and can meet the requirements of low energy consumption of rural buildings. “Garden” elements throughout the intended to influence, so as to strengthen the effect of education. 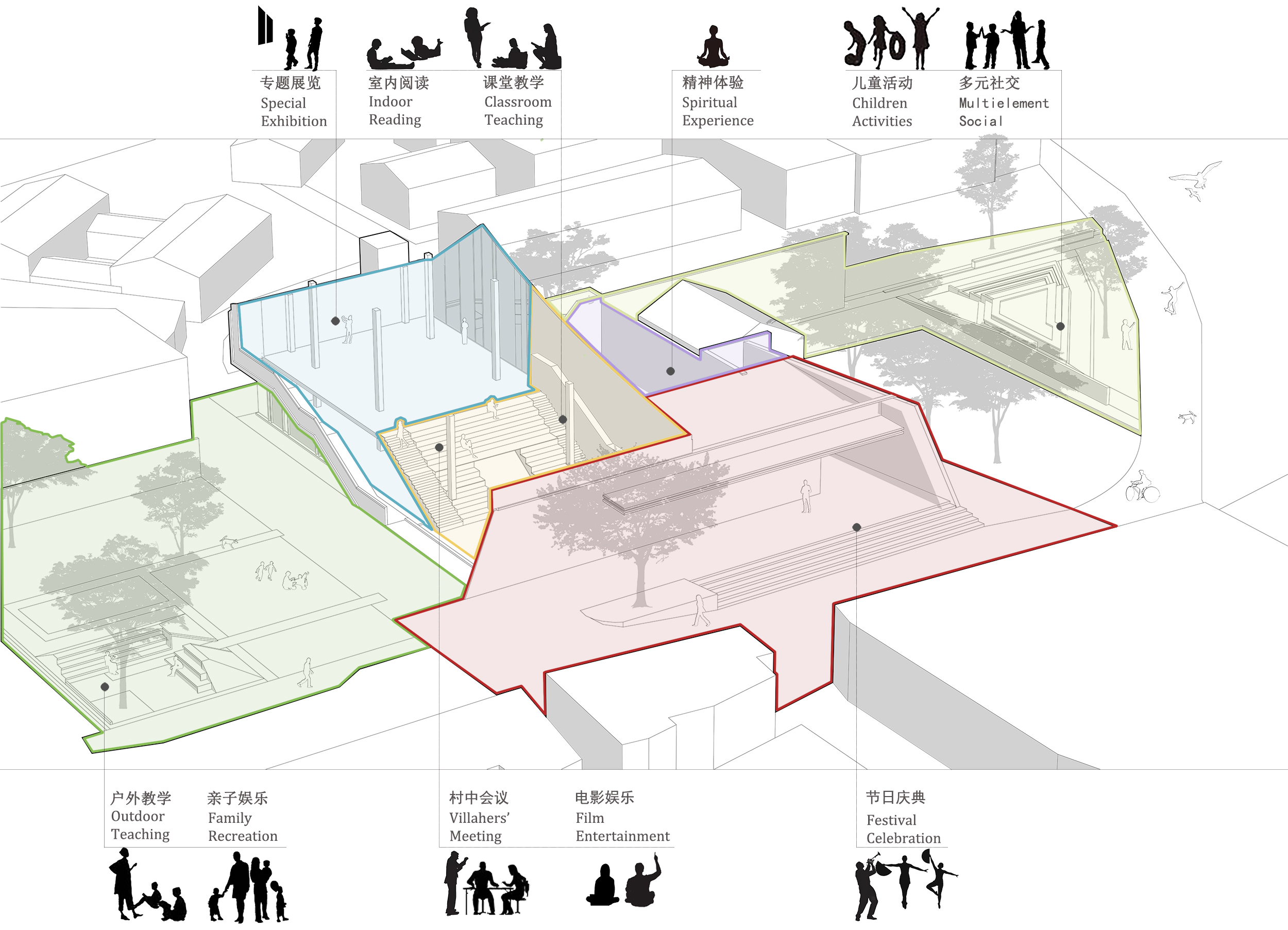 2.“树下讲坛”–寓意古老的户外课堂形式 “The Forum Under the Tree”—the Implication of the Ancient Outdoor Classroom Form

In ancient times, there were historical allusions of saints giving lectures or epiphany under the tree in the East. For example, Confucius taught and Shakyamuni had an epiphany under the tree. The concept of “the forum under the tree” came from this. Keep the original Longan tree with a huge crown at the west end of the site, and build a “podium” under the tree as an “outdoor classroom”. The terrain follows the grass and rises like “land art”, with steps hidden inside, teachers teach under trees, and students can sit on both sides.

▼“树下讲坛”平面图 Plan of “The Forum under the Tree” 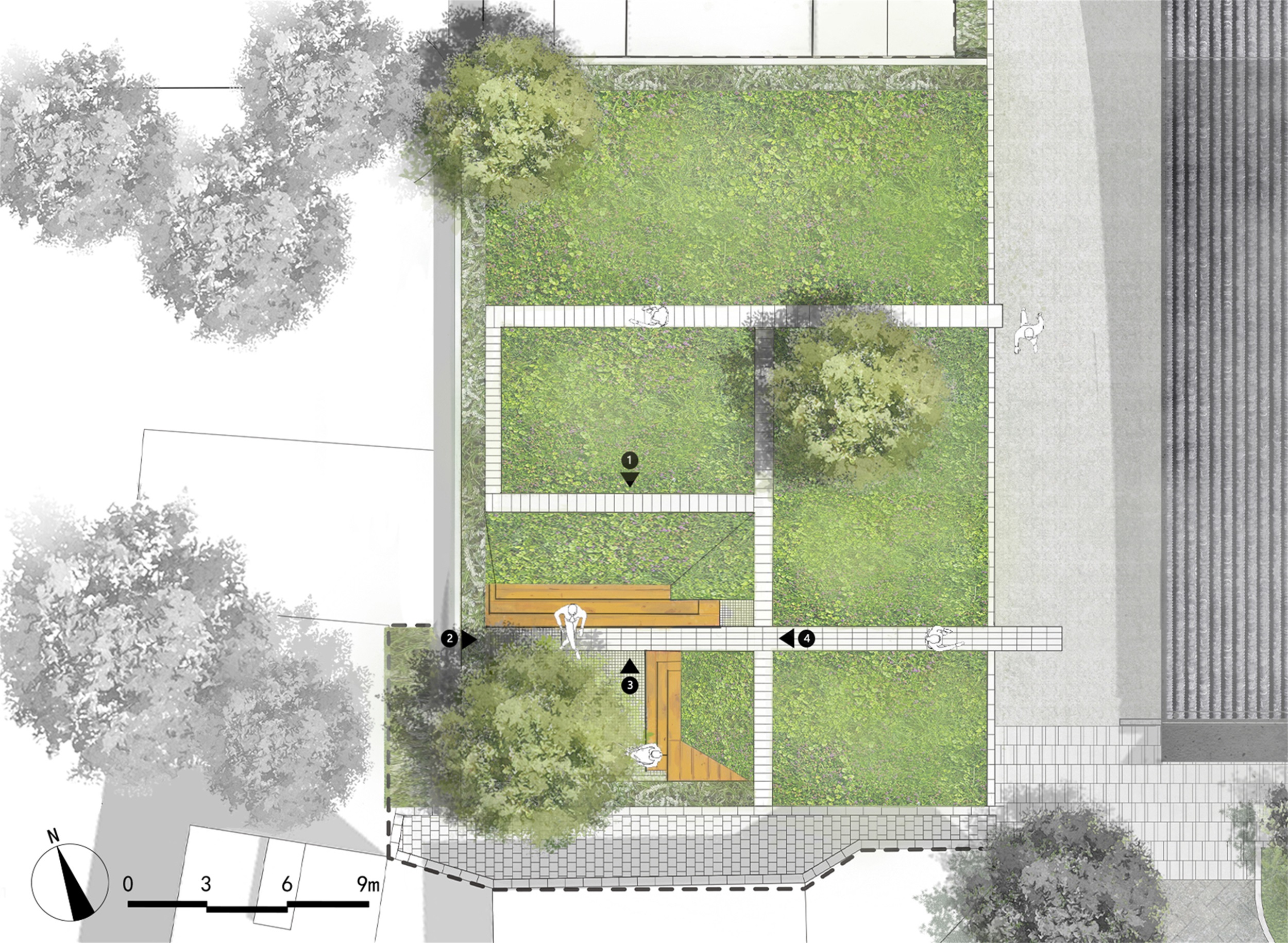 ▼树下教学情景 Teaching under the tree 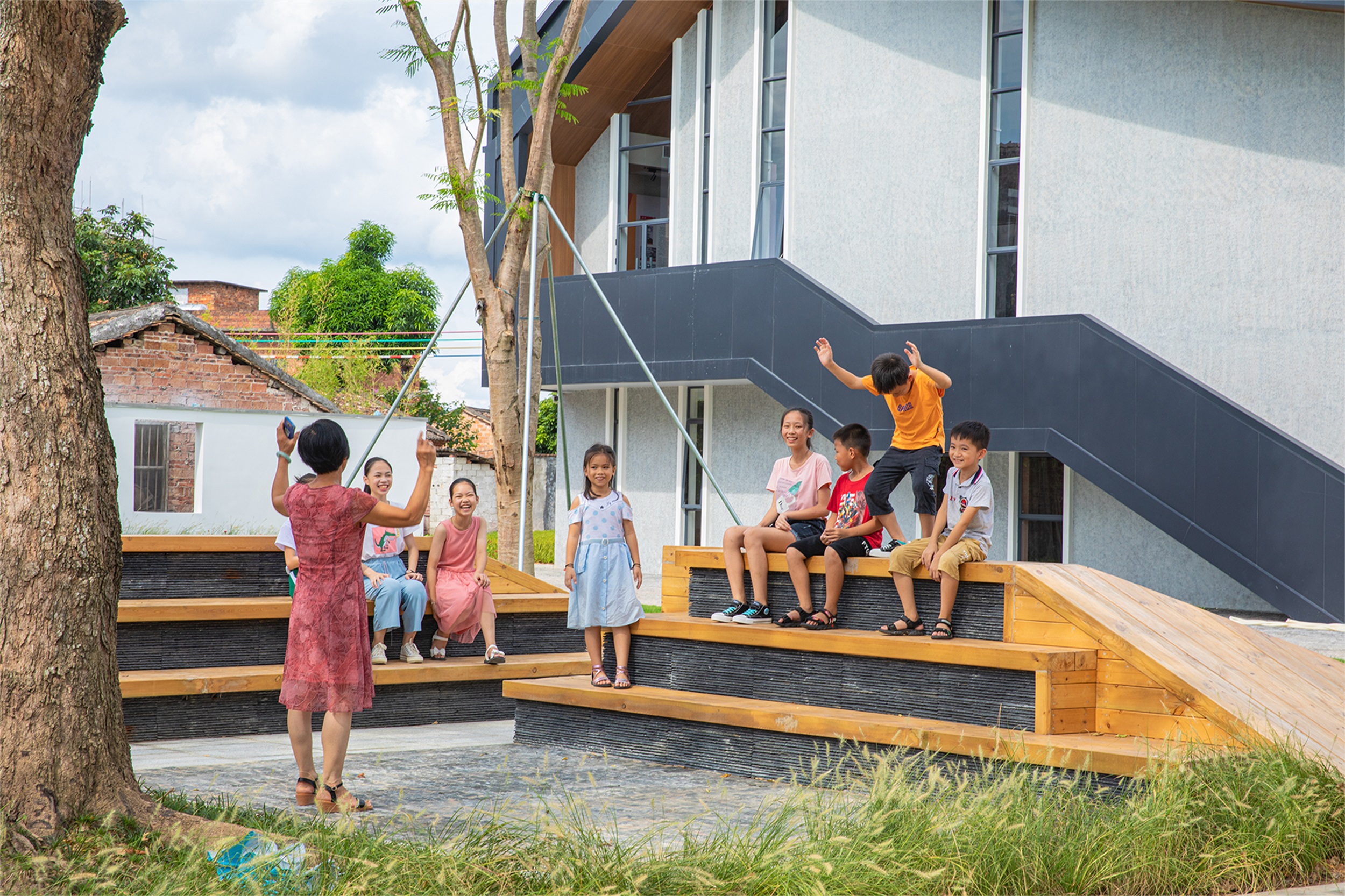 ▼树影下的阅读 Reading under the shadow of a tree 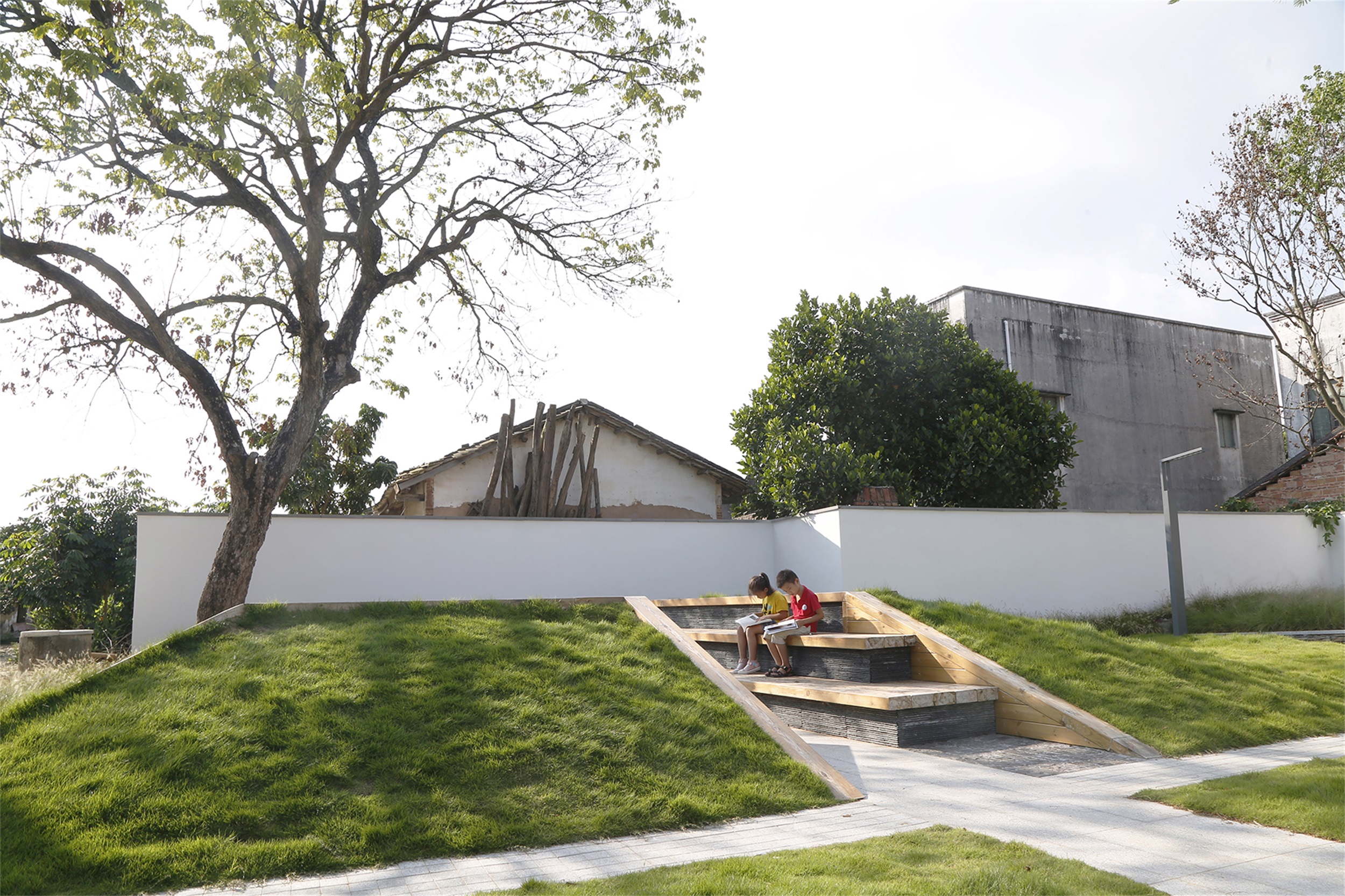 The triangular land on the other side is a small stepped flowerbed that echoes the things of the “forum under the tree”: one is triangular and the other is square, one convex and one concave, one white and one black. Guide the children to “climb up” gradually along the steps through the ramp. The “circular way” ascends the terrain to meet the active nature of children, stimulate all forms of children’s activities, promote exchanges between all ages and parent-child activities, and become a “social classroom” for the growth of children in the village. ▼儿童”环回”而上 Children climb up and down The main building of the education base takes into account multiple functions such as exhibition and education venues. The interior is integrated into three flexible and functionally replaceable spaces. The large steps are used as the connecting medium to achieve both “flowing” and connected, independent and “mutual shared” with each other. Therefore, the exhibition hall space with a total construction area of about 500 square meters does not appear to be narrow. When there is no exhibition, it can be flexibly converted into teaching, village meeting, film and television entertainment, book reading and other purposes. The composite function provides villagers with a variety of venues for activities, which is conducive to increasing the utilization rate of buildings and avoiding the unused waste commonly seen in education bases or exhibition spaces in the past. 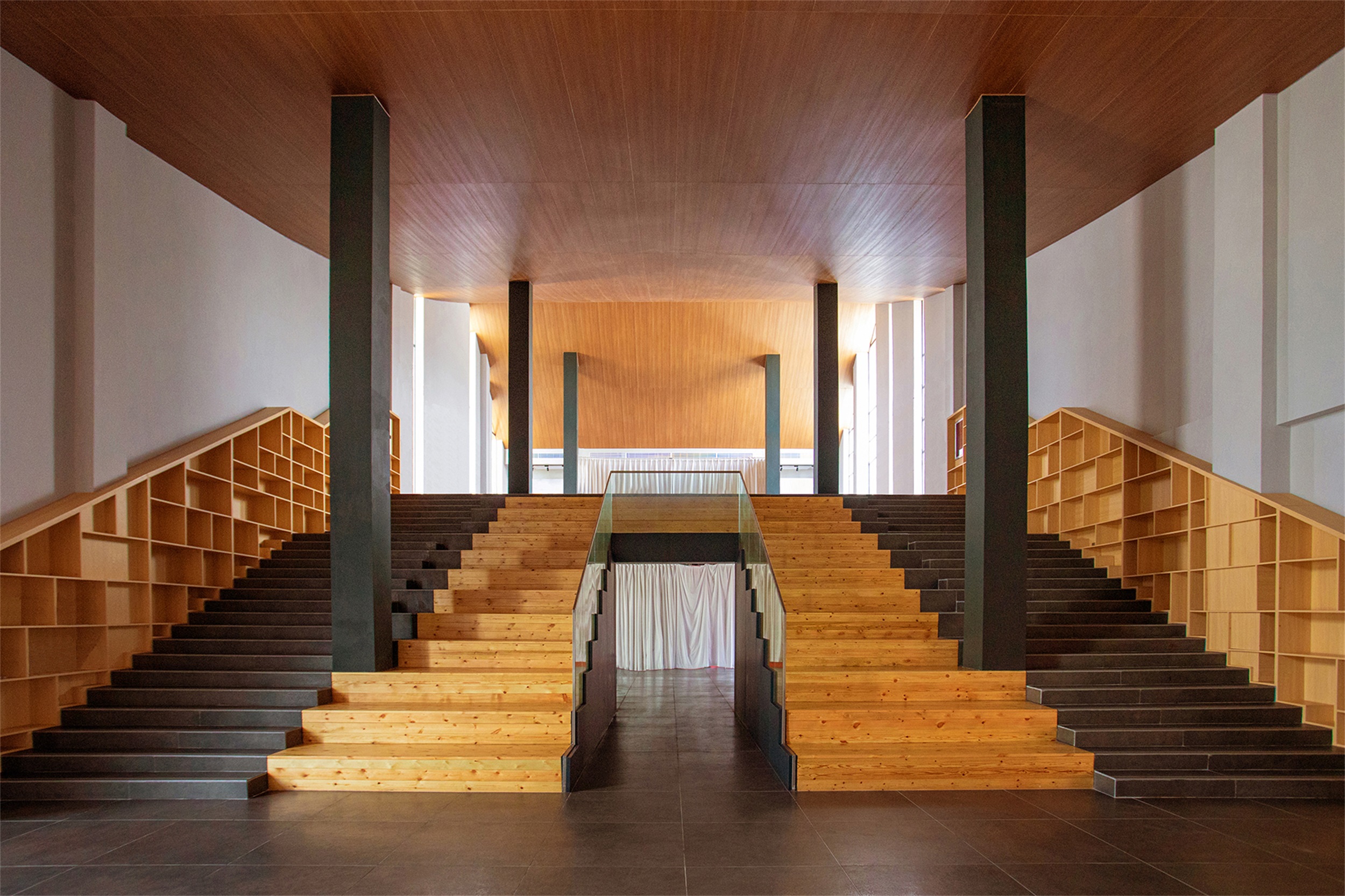 “Forum under the tree” and “circular hill” are not only parks, but also topography and facilities. Without expensive entertainment equipment or exaggerated shapes, its image is minimalist but contains endless possibilities: this is a children’s paradise, and where grandchildren can listen to their ancestors Tell the story of life; children can snuggle next to their mothers to experience family affection; children help and learn from each other, friendship will be produced here; left-behind villagers are not alone; and here can also become a container for different ages and various activities.

▼儿童获得与大地亲密接触的理由 Reasons for children to get close contact with the

▼儿童·午后·远方 Children climb up and down 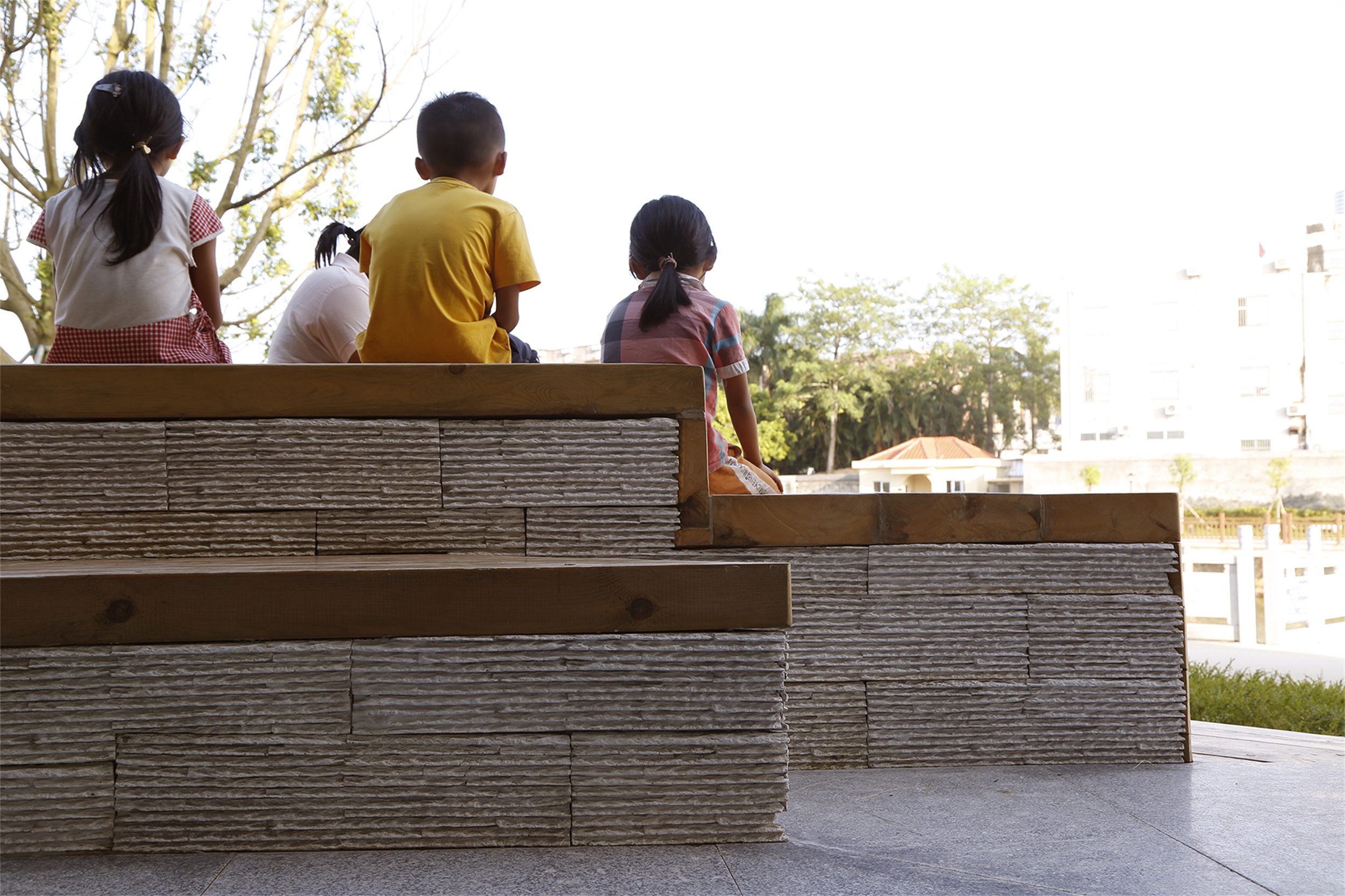 The revolutionary traditional education base has been well received by the local people since it was put into use for nearly a year, and it has been upgraded from a rural exhibition hall to a city-level “patriotic” education base.

The red architecture design in the future should be a spiritual destination. Perhaps the image is more close to the people and more open, perhaps with more diverse functions, or perhaps more rooted in the profound local culture—exploring deeper spiritual pursuits and integrating into the lives of the people, and letting the masses become spiritually rich and live a more diverse lives, that may be the key to the vitality of the design. ▼二层平面图 Plan of the Second Floor 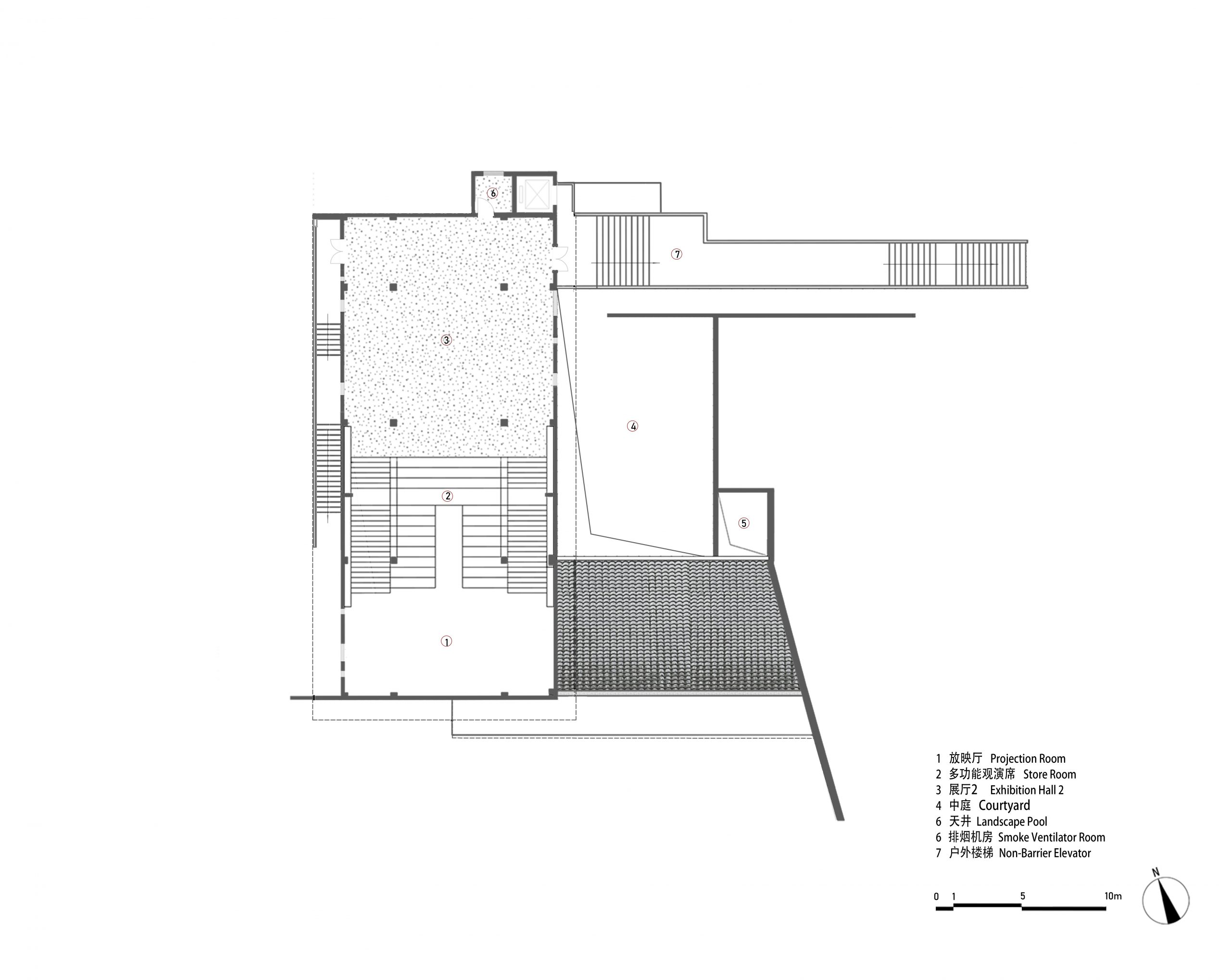 ▼“树下讲坛”立面图 Elevation of “The Forum under the Tree”