Archermit: “Bamboo Branch Academy” is located in Yongjiang Village, Zhuhai Town, Changning County, Yibin, Sichuan Province, near the famous Shunan Bamboo Sea Scenic Area. The project, situated in a small village in Huangjuetan, Yongjiang Village, is surrounded by bamboo forests, paddy fields, vegetable fields, and hills. The Yujiang River is babbling in the west and the south, and Shunan Bamboo Sea in the north rolls like a large green screen. 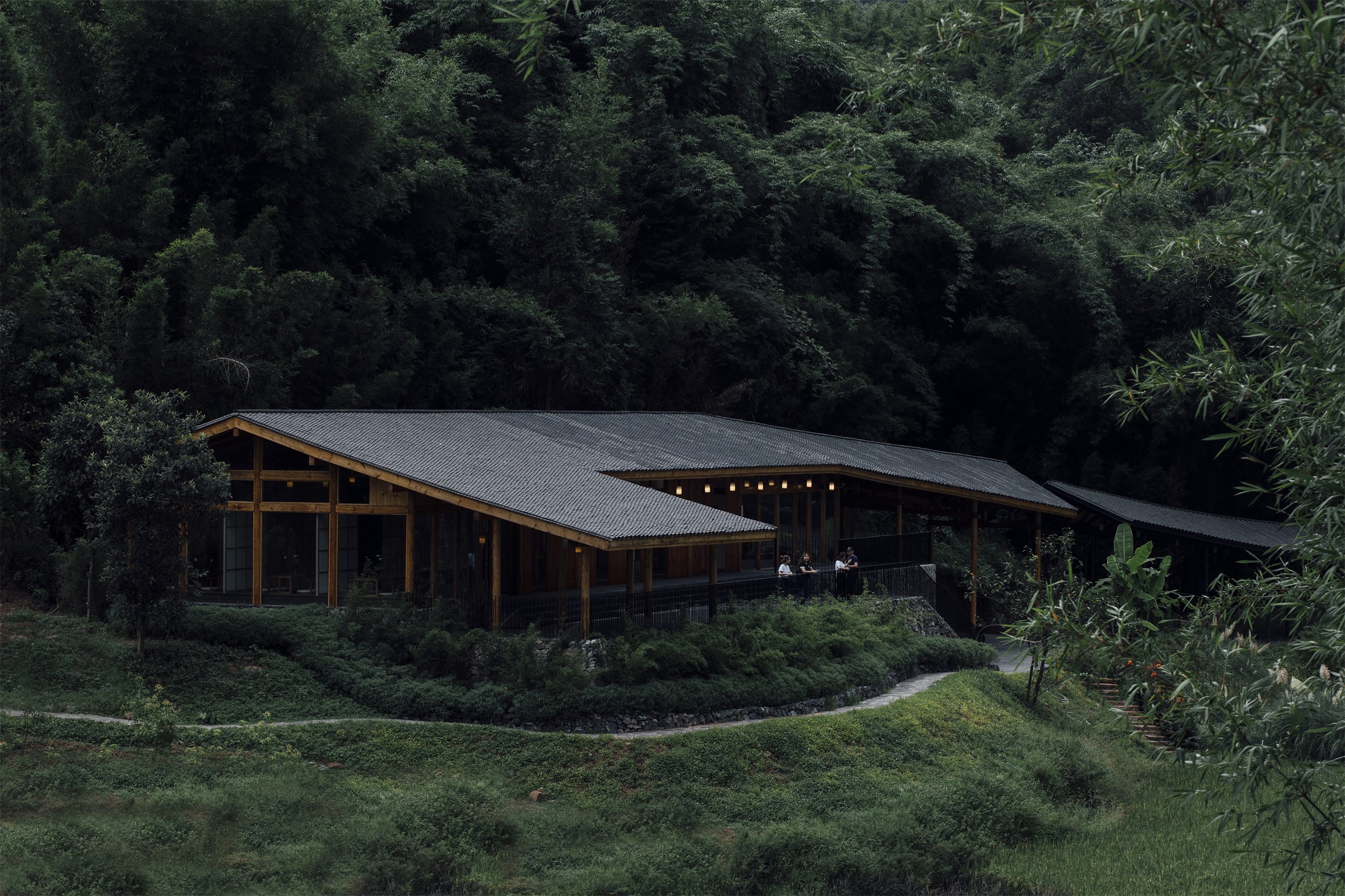 “Bamboo Branch Academy” was developed as China implemented the “rural revitalization” strategy. Mentally, its architectural purpose is to “develop the bamboo industry in accordance with local conditions, and landscape Sichuan villages with bamboo forests” and “make bamboo of Yibin an ecological gateway to introduce southern Sichuan to the world.” Physically, its architectural purpose is to build the Music Workshop under Bamboo, Paddy Field Academy, and Guild Hall for Buddhist Meditation.

▽项目鸟瞰 Aerial view of the project 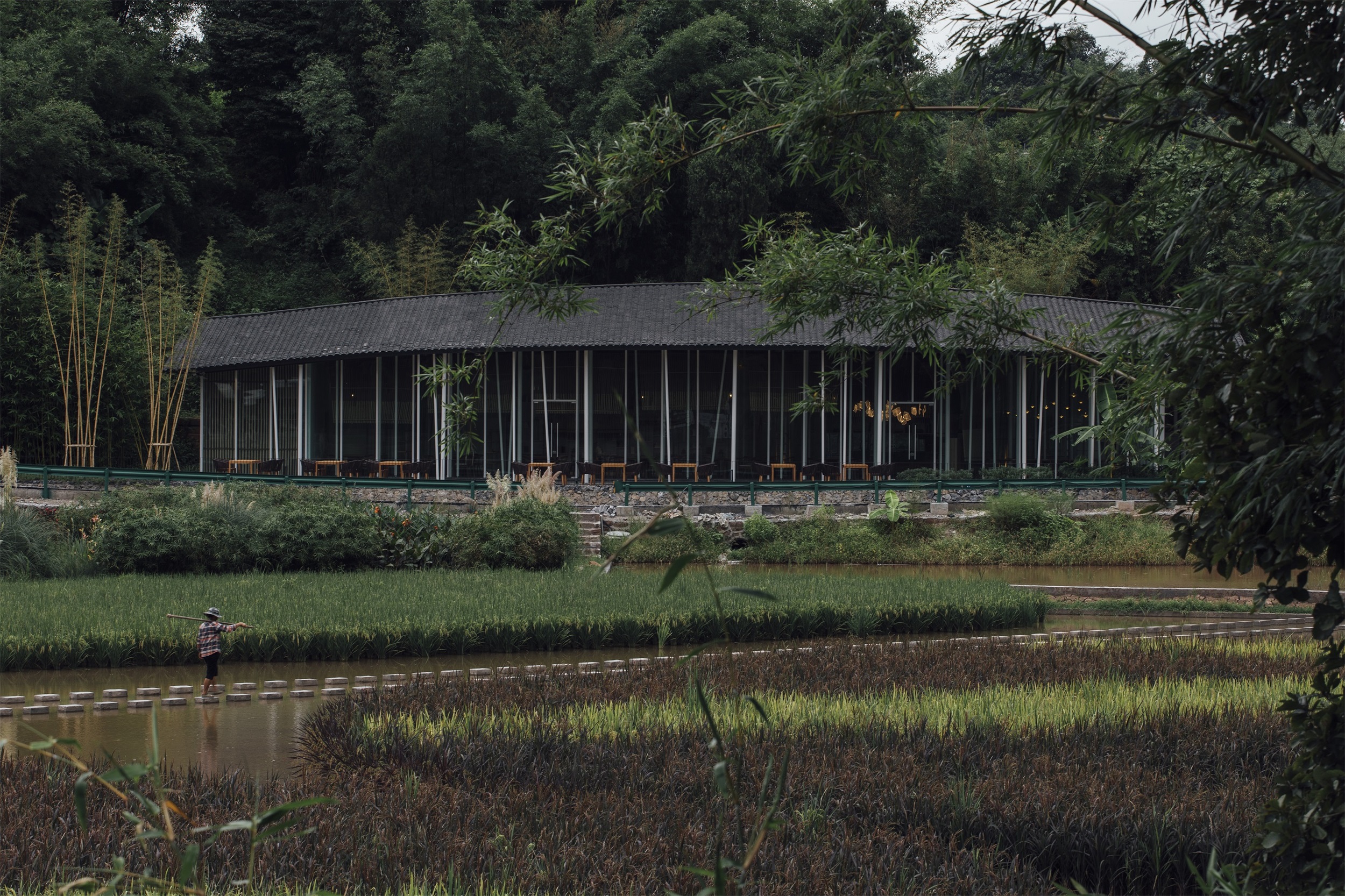 The field visit is a necessary process to transform conceptual images into impressions and abstract the impressions into the core architectural imagery.

▽项目整体环境鸟瞰 Aerial view of the overall environment of the project

The first visit was conducted in the late winter of January 2019. The village was wreathed in mist with all plants withered. Only the ducks playing in the paddy fields, dogs barking at strangers, and villagers strolling in the fields add to its vitality. Though quite bleak and desolate, it brought a rare sense of tranquility and leisure.

We were impressed by the various images here – the bamboo-clad hills around the base, the mud walls covered with bamboo strips surrounding the dilapidated house, the grayish blue tiled roof, and the plantain trees next to the old house. They are common in the countryside of Sichuan, and hardly can leave a deep impression.

▽随处可见欲凌空 You can see it everywhere

We got excited upon seeing the bamboo forest by the river before leaving. Numerous bamboo shoots thrived with irresistible momentum, rising out of the canopy formed by mature bamboo towards the sky. A few had sprouted, reminding us of a bamboo-themed poem written by Zhang Zhengjian. It was in stark contrast with what we saw back in the village, which impressed us a lot. It reminded us of the motif of the project – “revitalization”, which can be linked up with such words and phrases as “prominence,” “getting rid of the stale and bringing forth the fresh,” and “prosperity of both the new and the old.”

We came here the second time in the early spring of February. The bamboo trees on the hills around the village were about to reach the sky with tender shoots like clusters of green clouds. We saw first hand the images like “mottled shadows cast by bamboo trees,” “the bamboo forest under the moon,” and “the winding path through the bamboo forest.” We were impressed by the corridors naturally formed by bamboo trees, and their light and shadow, smell and sound. 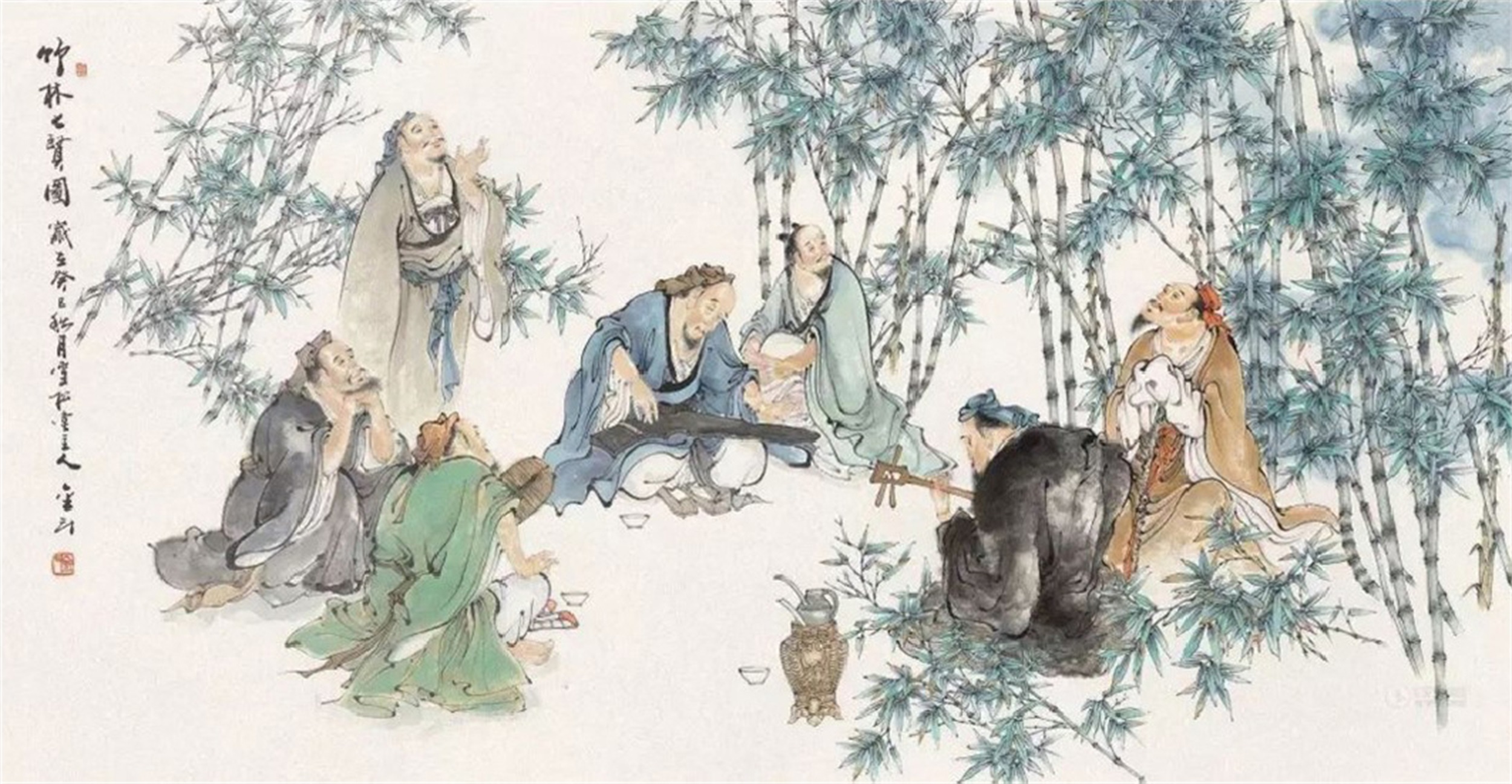 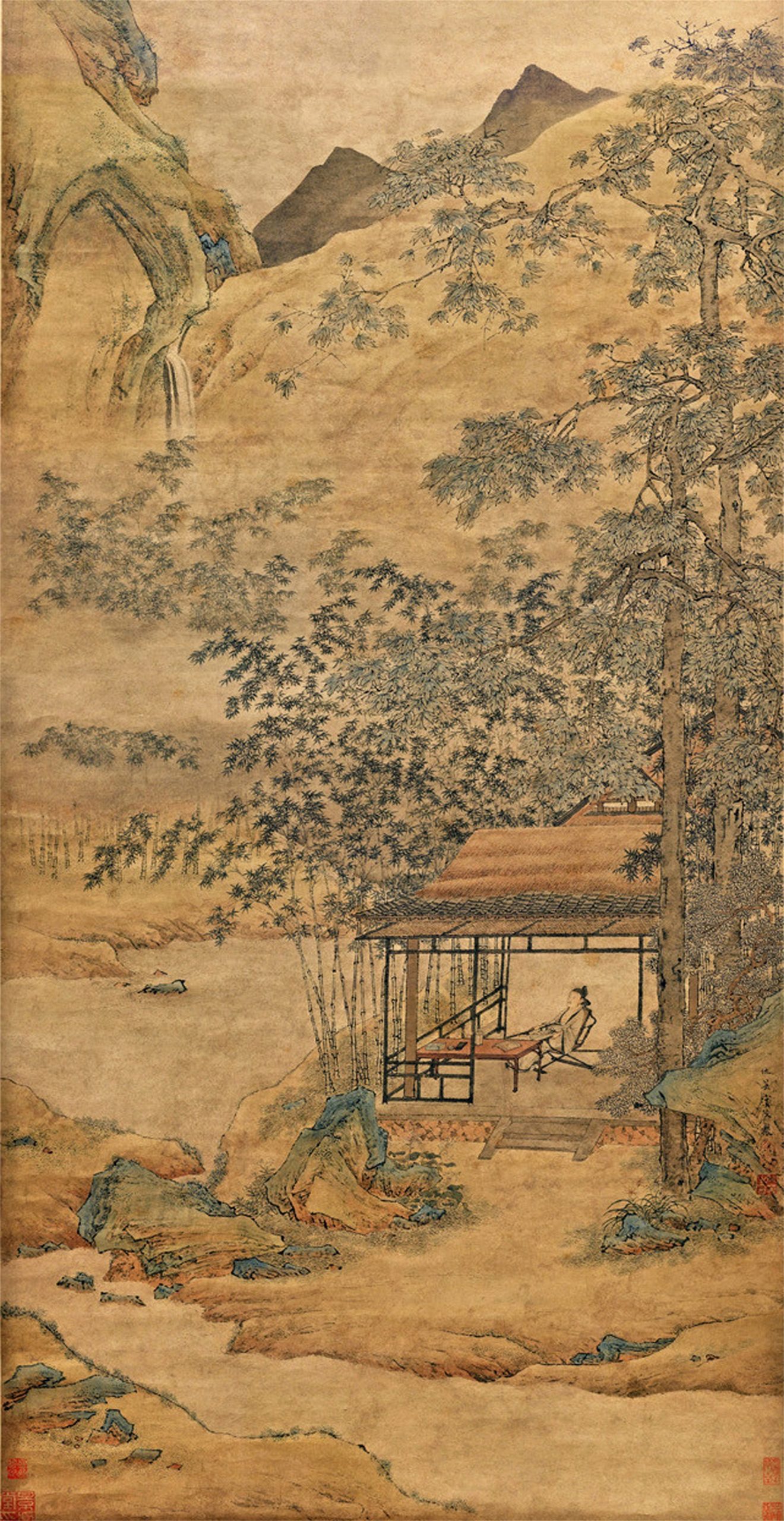 In ancient China, music was called “Sizhu”, and traditional Chinese musical instruments such as flute, xiao, sheng, zheng and erhu are all made of bamboo. Chinese classical music is closely related to poetry. Songs were distinguished from poems in ancient China as the former was accompanied by music and the latter was not. Poems, a linguistic art, were derived from songs that fall under the musical literature with a long history. The emergence of Chinese academies can be traced back to the Han Dynasty. They were places where literati and scholars gathered for giving lectures at first, and later developed into venues for lectures, debates, research, and collection of books. The books in ancient China were made of bamboo slips. Meditation is generally a method of promoting peace of mind and self-cultivation, and highly compatible with music workshops and academies in terms of function. 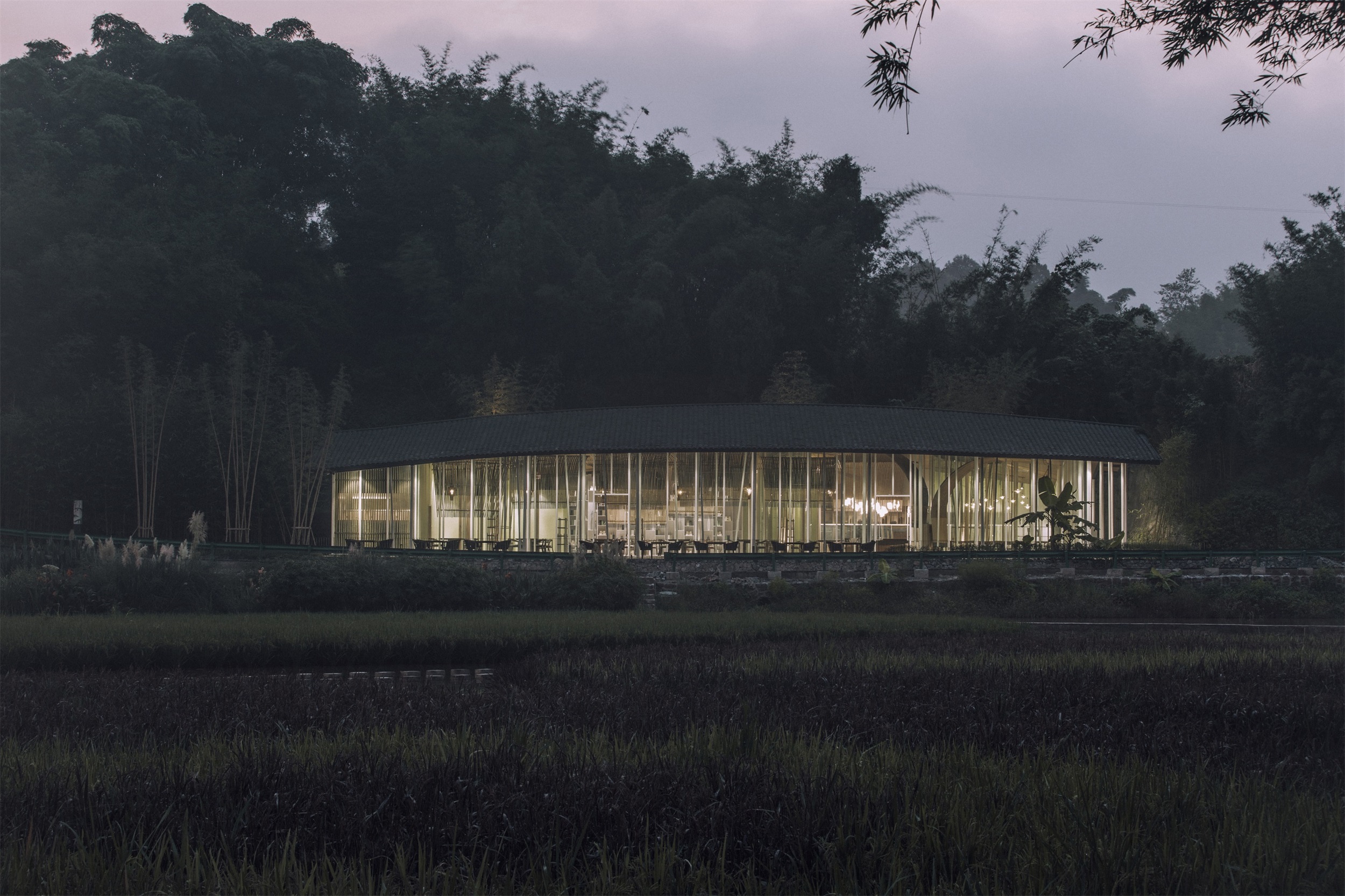 ▽书院竹影、竹径、竹廊意象 Images of bamboo shadows, bamboo paths and bamboo corridors in the academy 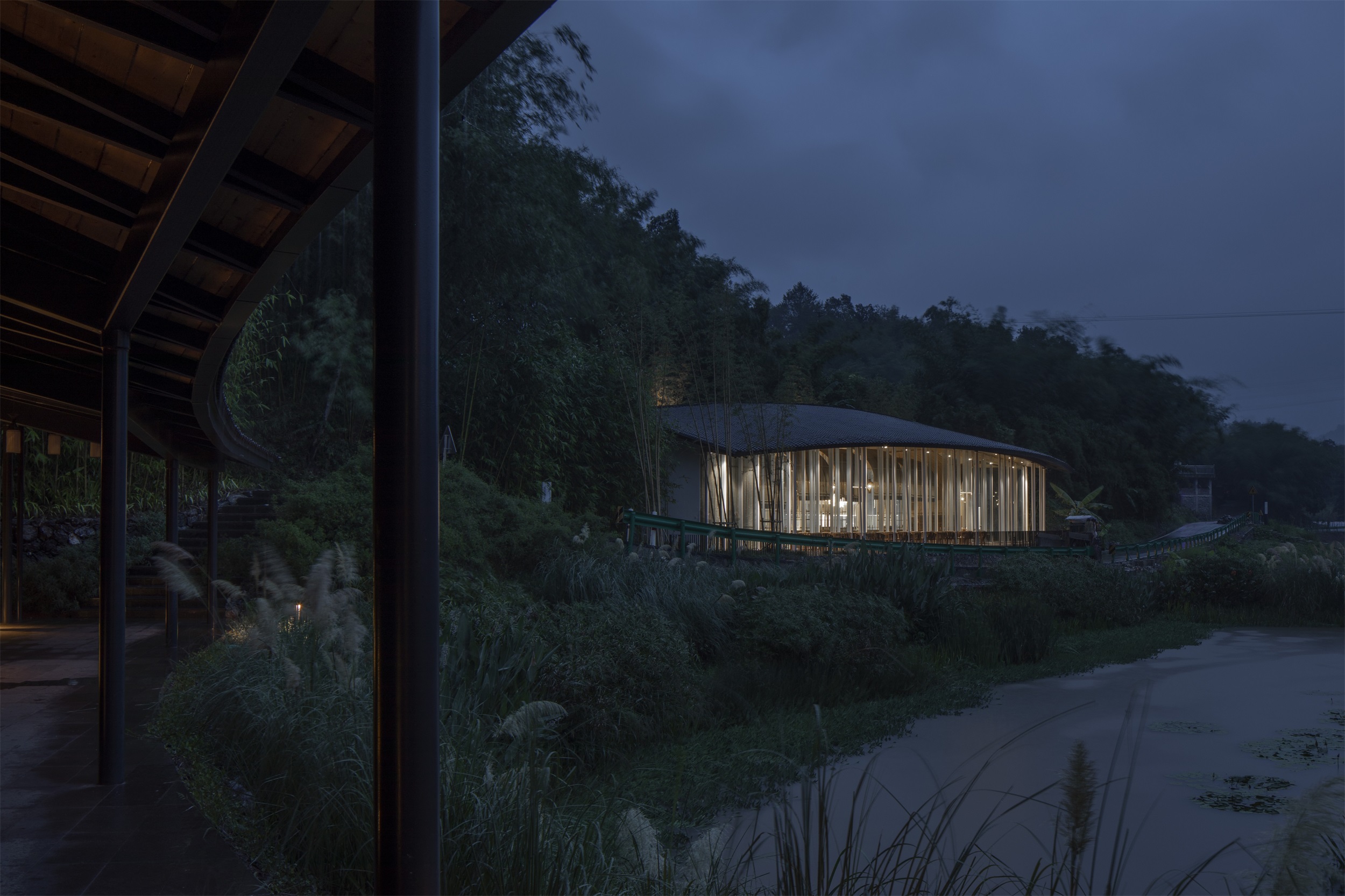 ▽雨雾中的竹枝书院 Bamboo Branch Academy in the rain and fog 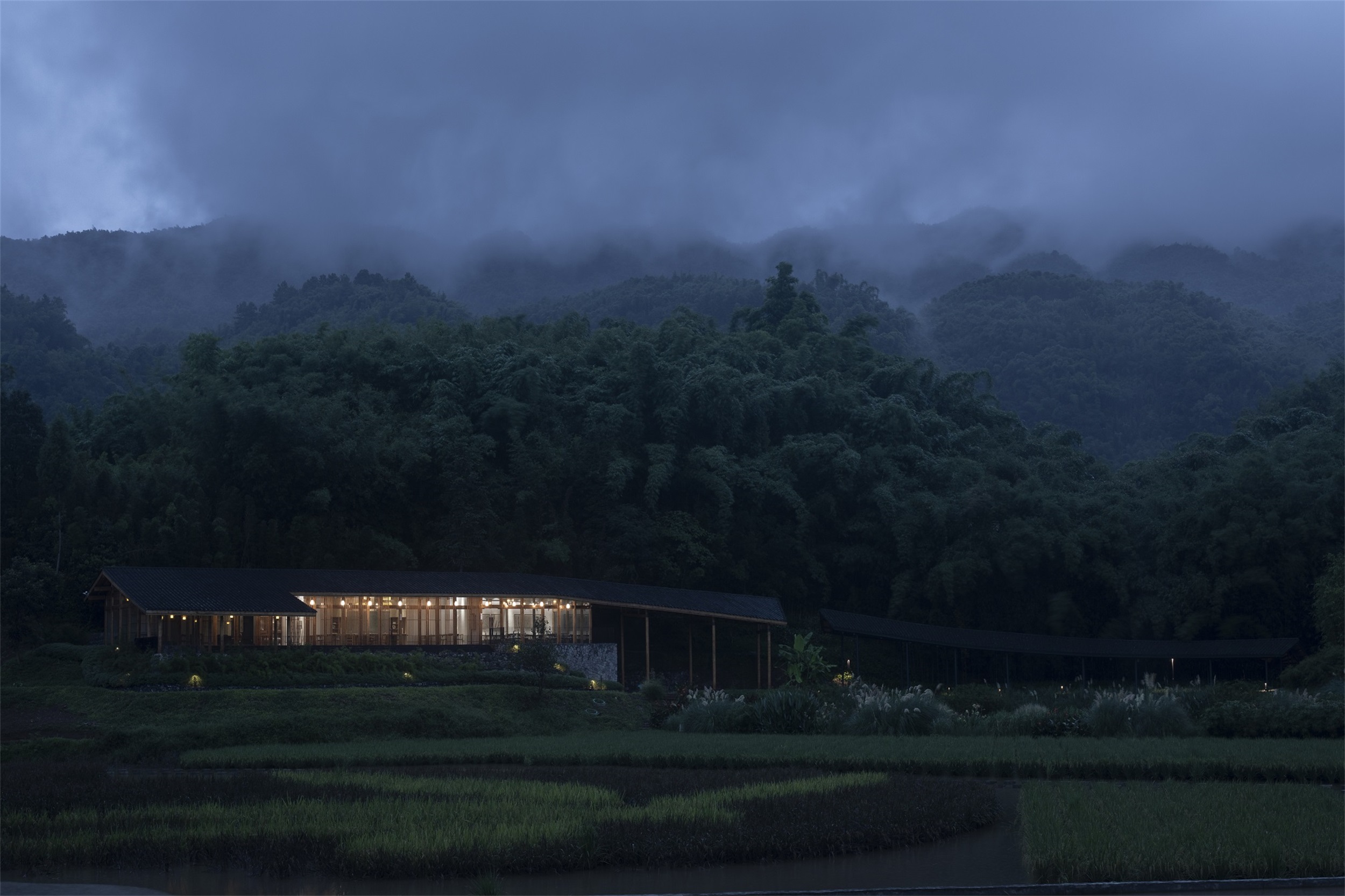 Zhuzhi (bamboo branch) is the name of a tune and one of the Yuefu poems. It evolved from the folk songs in the ancient Ba and Yu areas. Li Yuxi, a poet in the Tang Dynasty, composed a poem for the tune when he served as the prefectural governor of Kuizhou to depict the climate, natural phenomena and customs. It was performed by the singer with dancers accompanied by flute and drum. Kuizhou (now Fengjie, Chongqing) was the political, economic, cultural, and military center of eastern Sichuan in the Tang Dynasty. Rongzhou (now Yibin) was a place of strategic importance in southern Sichuan in the Tang Dynasty and the first city along the Yangtze River. Rongzhou and Kuizhou are so closely connected by the Yangtze River geographically and culturally that the “mountains of Ba and waters of Shu” have enjoyed a reputation since ancient times. Many literati and scholars traveled here, such as Li Bai, Du Fu, Bai Juyi, Liu Yuxi, Su Shi, and Huang Tingjian, and wrote countless poems about this region. Zhuzhi is closely related to the music workshop as the folk song, and to the academy as the poem. Bamboo branches are important not only to bamboo itself, but also to traditional Chinese literature. The concrete and abstract imageries of bamboo branches coincided with the architectural purpose (music workshop, academy and meditation) and the scene that “the bamboo trees on the hills around the village were about to reach the sky with tender shoots like clusters of green clouds” greatly impressed us. ▽竹枝书院与竹林、山丘、稻田的共荣 The co-prosperity of Zhuzhi Academy with bamboo forests, hills and rice fields 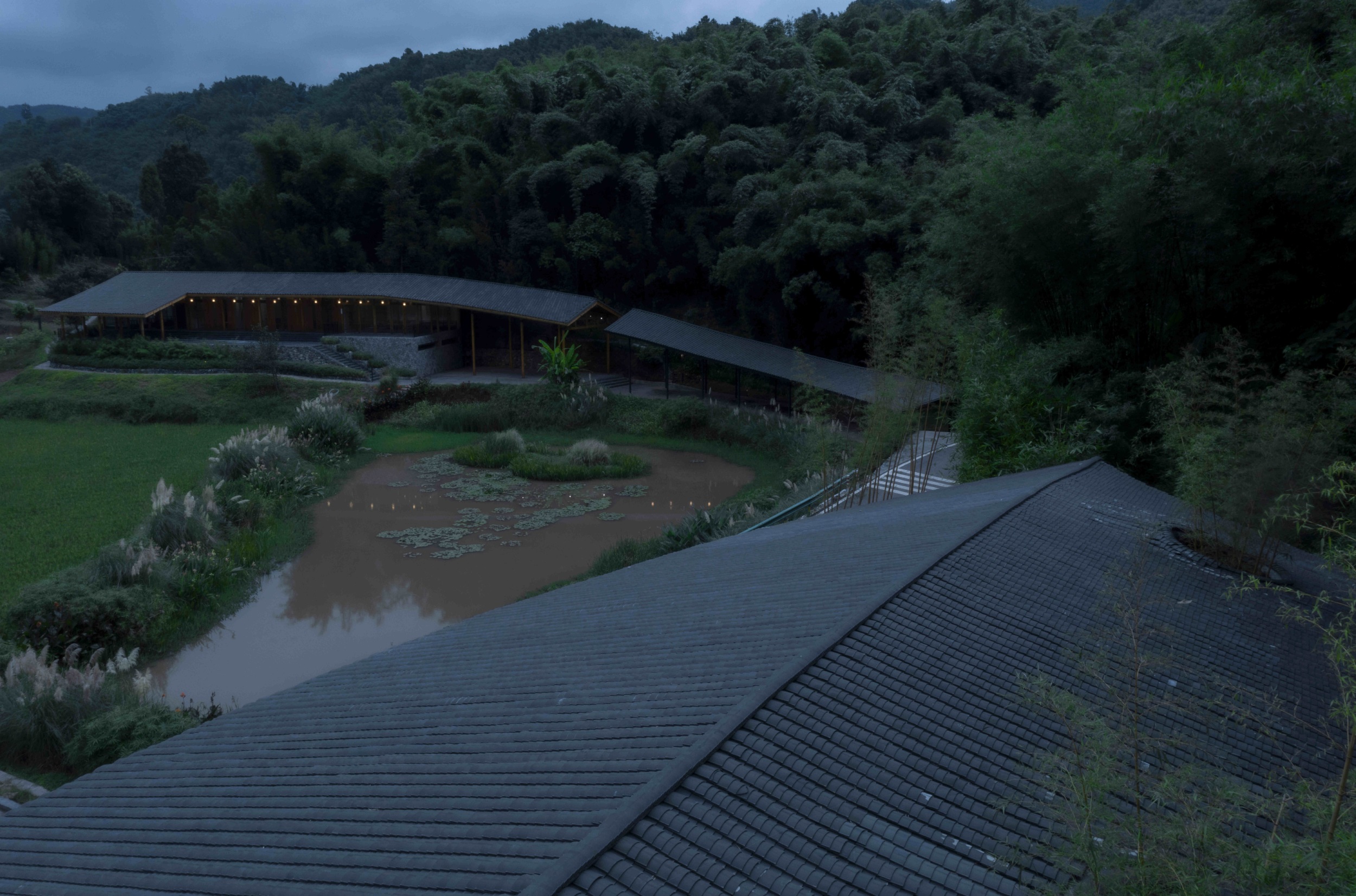 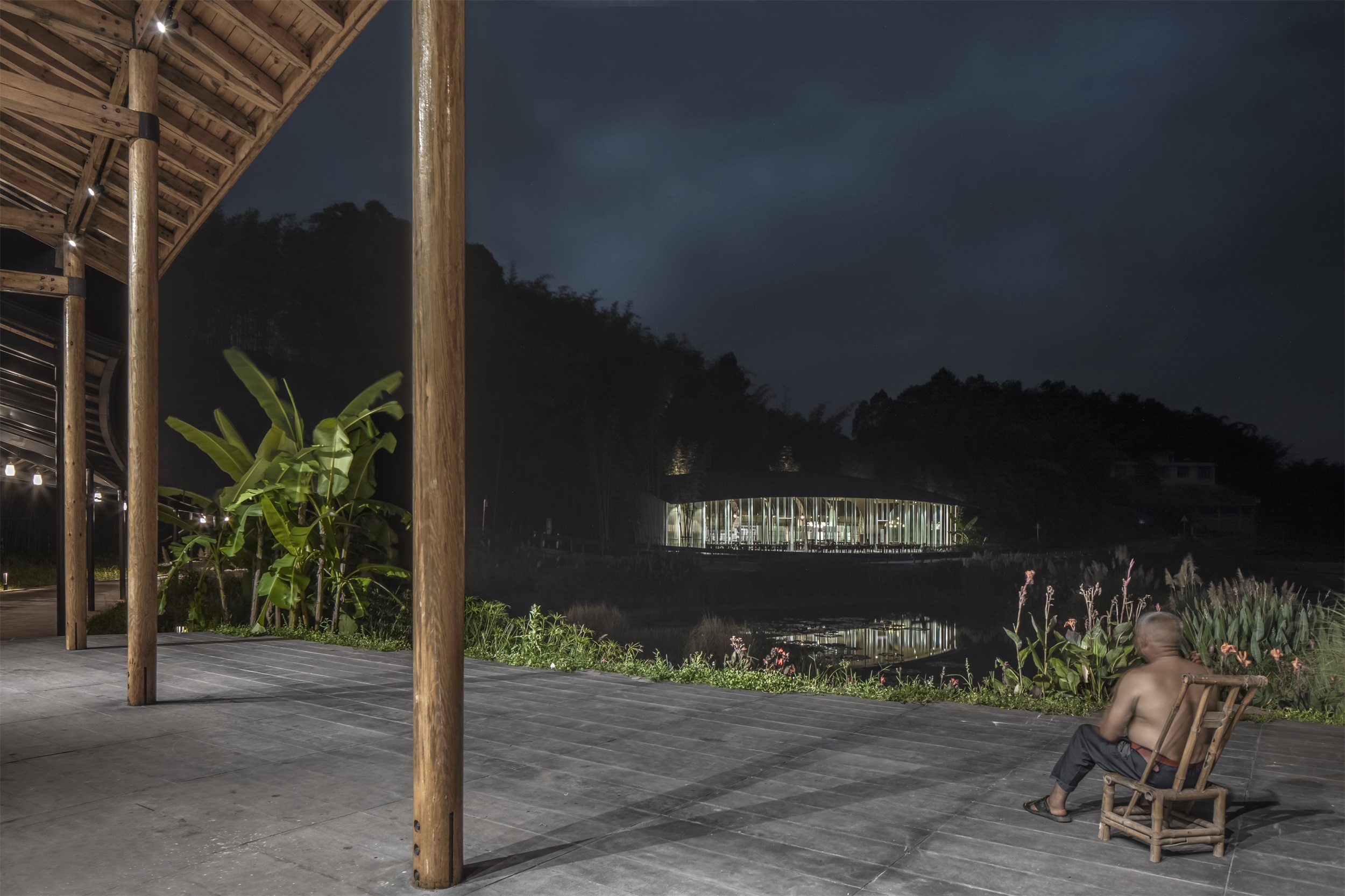 People in southern Sichuan live in villages built with and surrounded by bamboo traditionally, as characterized by “one house with one patch of farmland and one courtyard.” Mou Yanwu’s Written while Living near Water and Bamboo offers a prime example. By its barrage of beautiful imagery—such as a cabin encircled by clear water, green chiffon, vibrant fish and birds, the reflection of a balustrade on the rippling water, a small writing desk, a gentle green drizzle— the poem truly portrays the project’s architectural concept. The “cabin encircled by clear water” is a metaphor for the rolling architectural form, “the reflection of a balustrade on the rippling water” indicates the ever-changing eaves galleries, and the “small writing desk” the function of the academy; the “green chiffon, vibrant birds, reflection of a balustrade on the rippling water and a gentle green drizzle” vividly depicts a tiny world where architecture is in perfect harmony with nature, which is represented by bamboo forests, flying birds, rice paddies, and the light rain. “Between the willows green the river flows along; I hear my beloved from a boat breaking into song. The west is veiled in rain, the east enjoys sunshine; My beloved is as deep in love as the day is fine.” Liu Yuxi’s Bamboo Branch Song depicts an idyllic mood very similar to the scenes of interaction circulating for the architectural project of Bamboo Branch Academy. 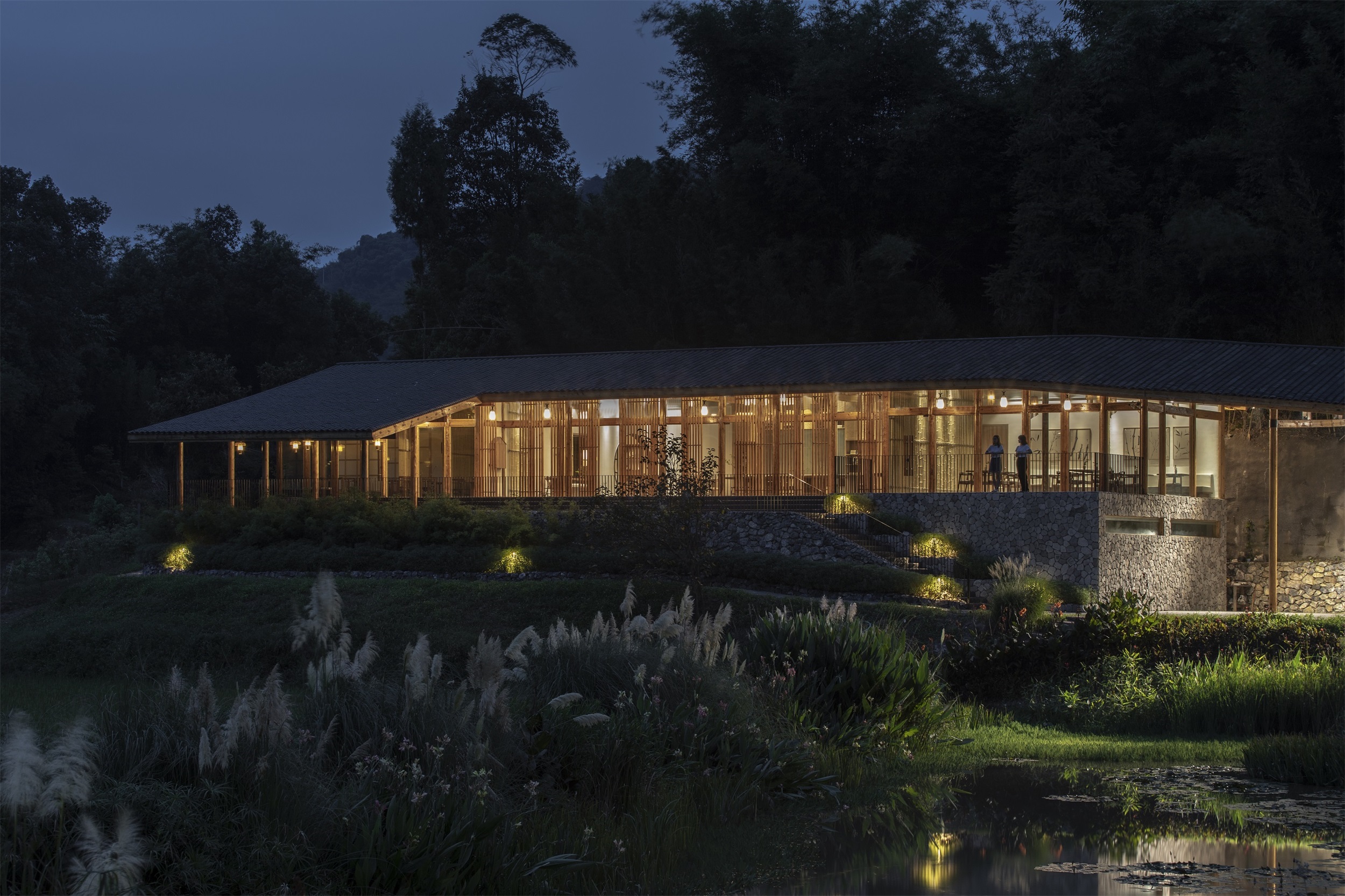 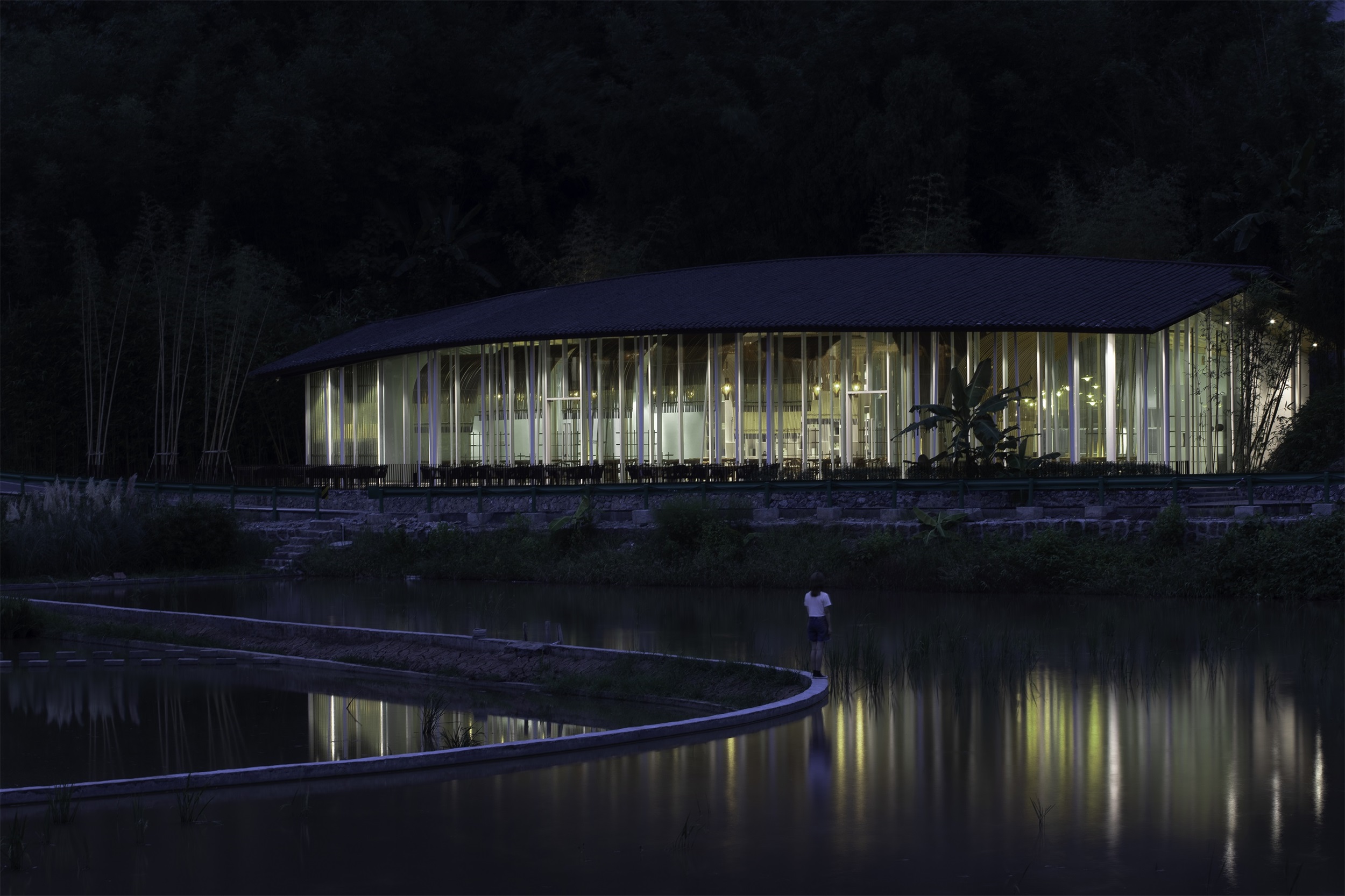 以意赋象，以象见意｜Give image with meaning, give opinion with image

“Bamboo Branch Academy” is created by remodeling two old houses in southern Sichuan. The functions of the music workshop, academy, and meditation should be well combined to separate Bamboo Branch Academy into two parts. The house far away from the road is serene and properly protected. It is renovated and turned into an academy for meditation. The one near the road and thus noisy is severely damaged and should be rebuilt into the music workshop. The two academies are connected by a corridor to create an “image” of “surrounding the house” and a multi-functional outdoor space to add vitality. 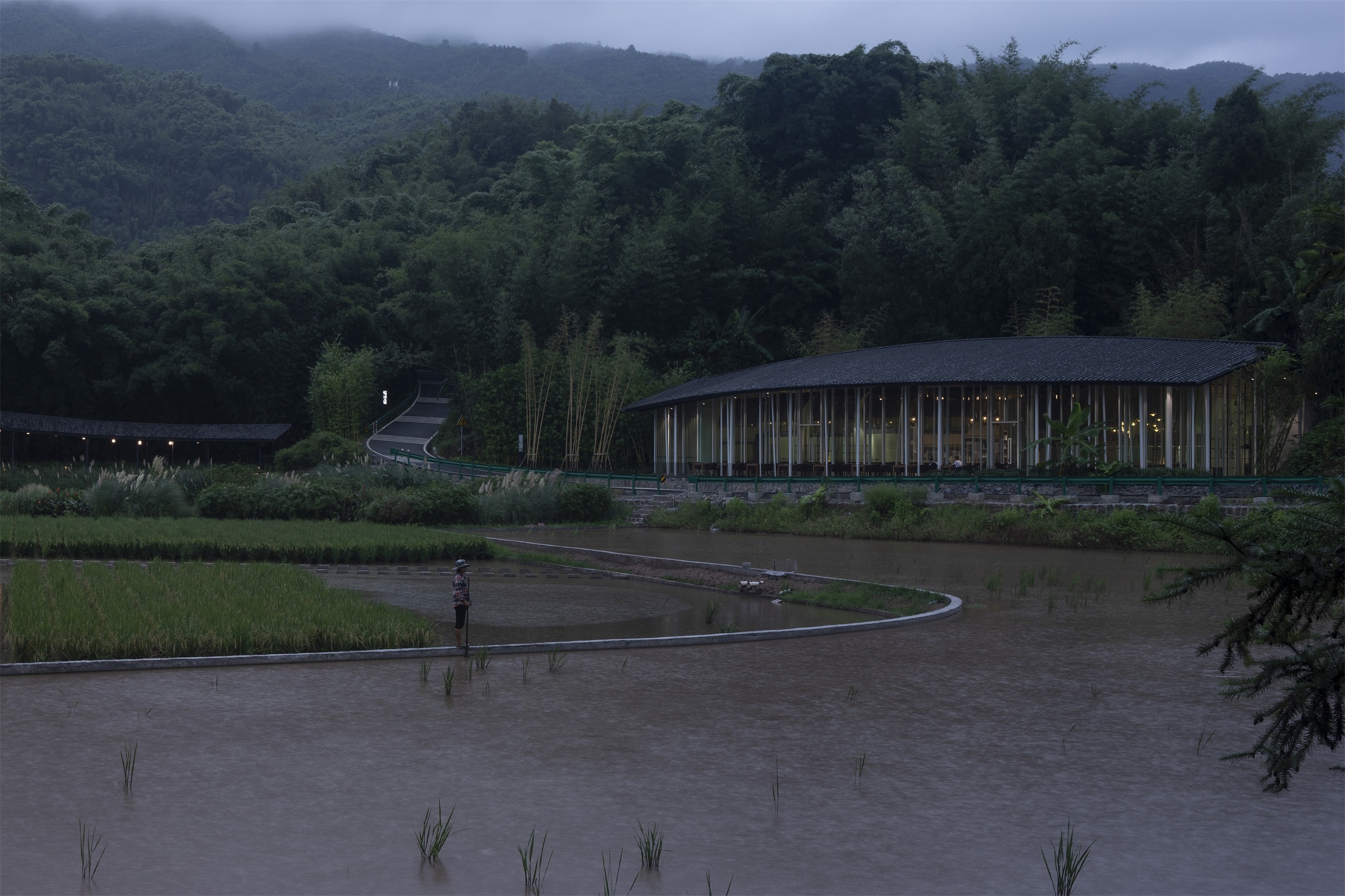 The modesty of bamboo shares something in common with zen. The idea of bamboo knots is turned into the form of the interior and exterior of the academy for meditation. The image of bamboo knots is materialized with the semi-outdoor yard, the porch with eave and the ventilated yet non-penetrated inner room. The idea of the unrivaled nature of bamboo is integrated with that of liveliness of the music workshop. The idea of “bamboo groves casting shadows and flanking a winding path to tranquility” blends into the image of the whole space of the music workshop, and is represented in an abstract way by the bamboo thickets in the yard, the white steel pipes in the porch, the indoor glass patio and bamboo installations.

▽绕屋之象 The icon of the house 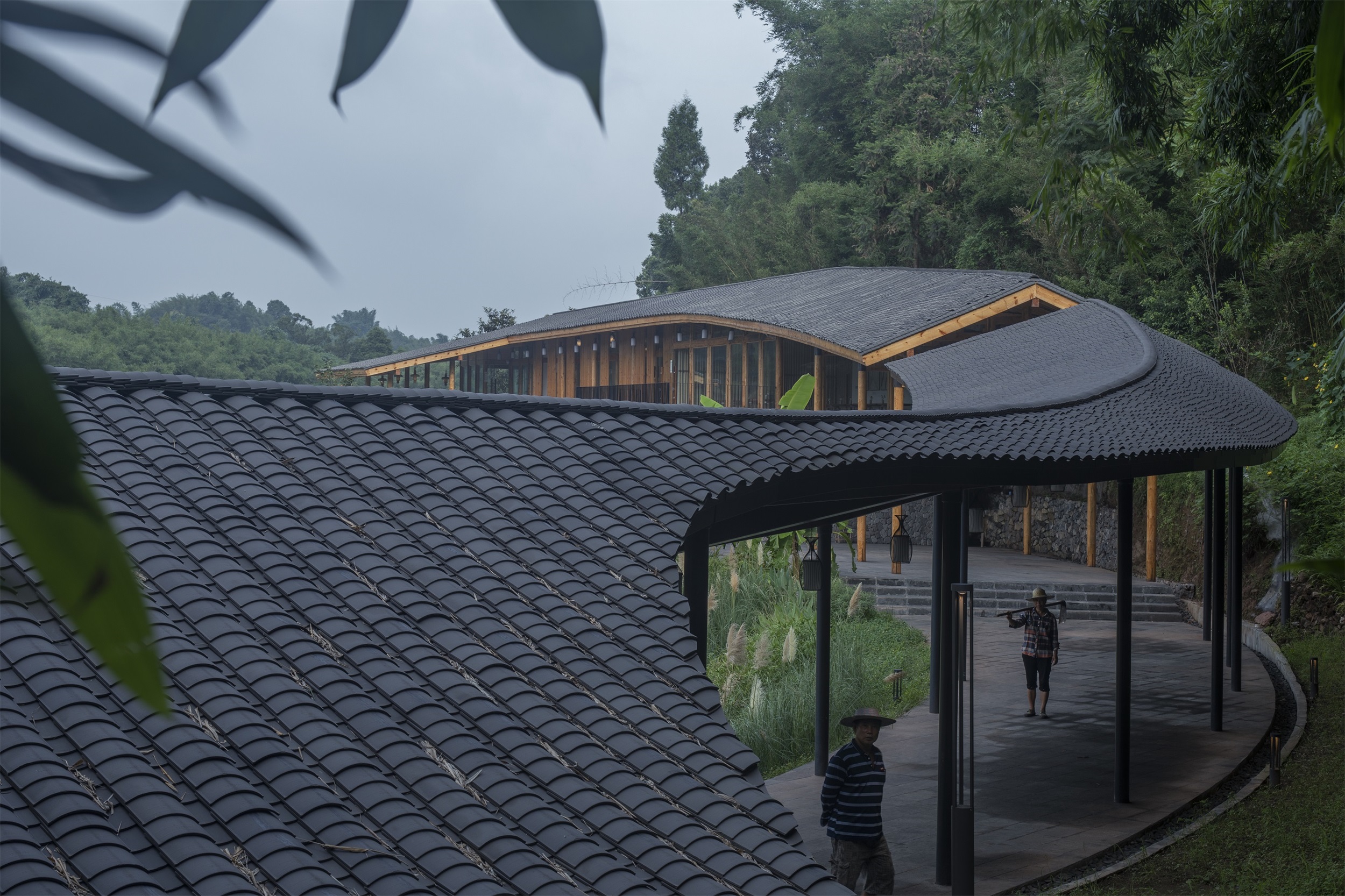 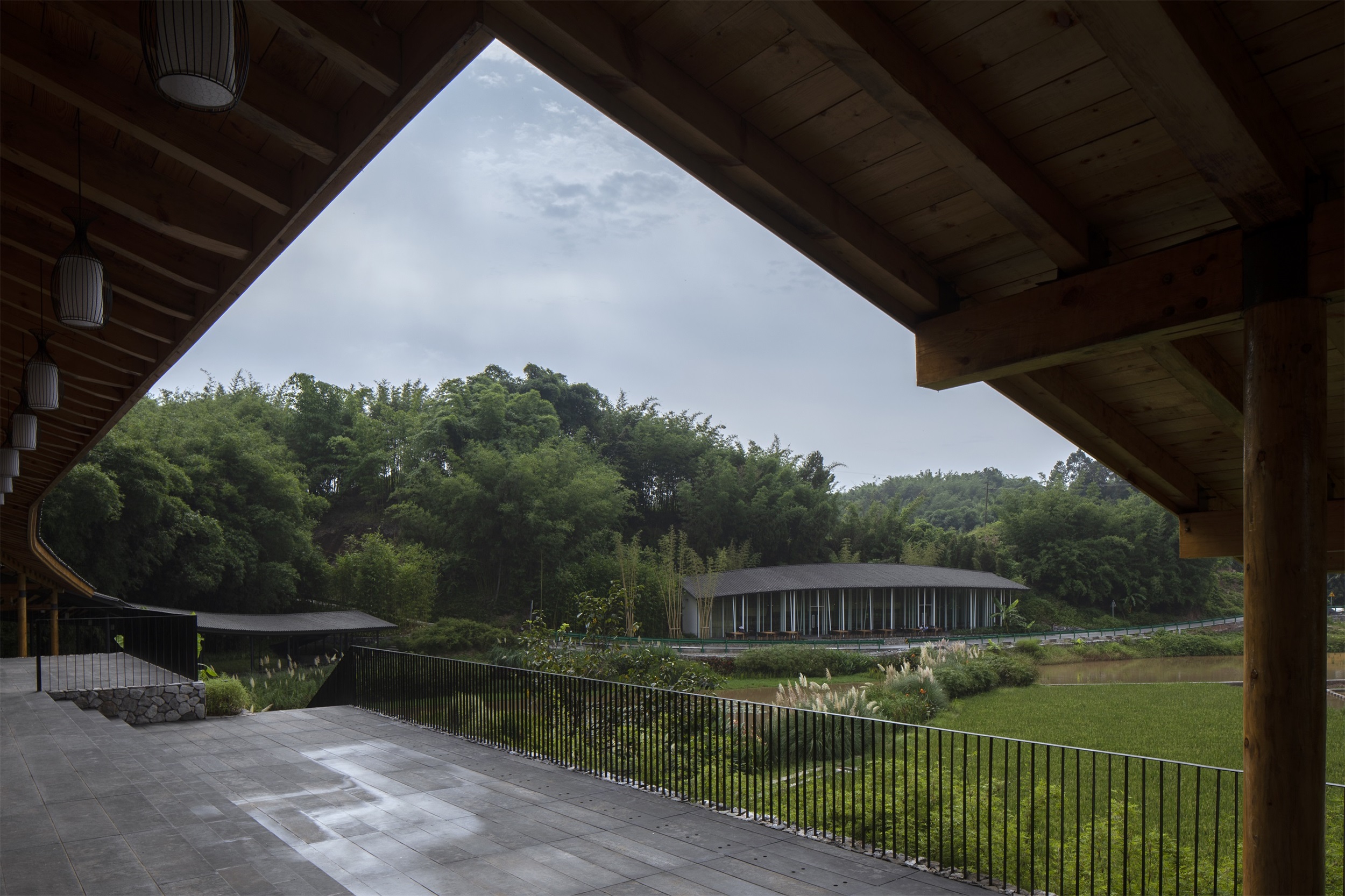 ▽书院晨曦 Dawn of the Academy 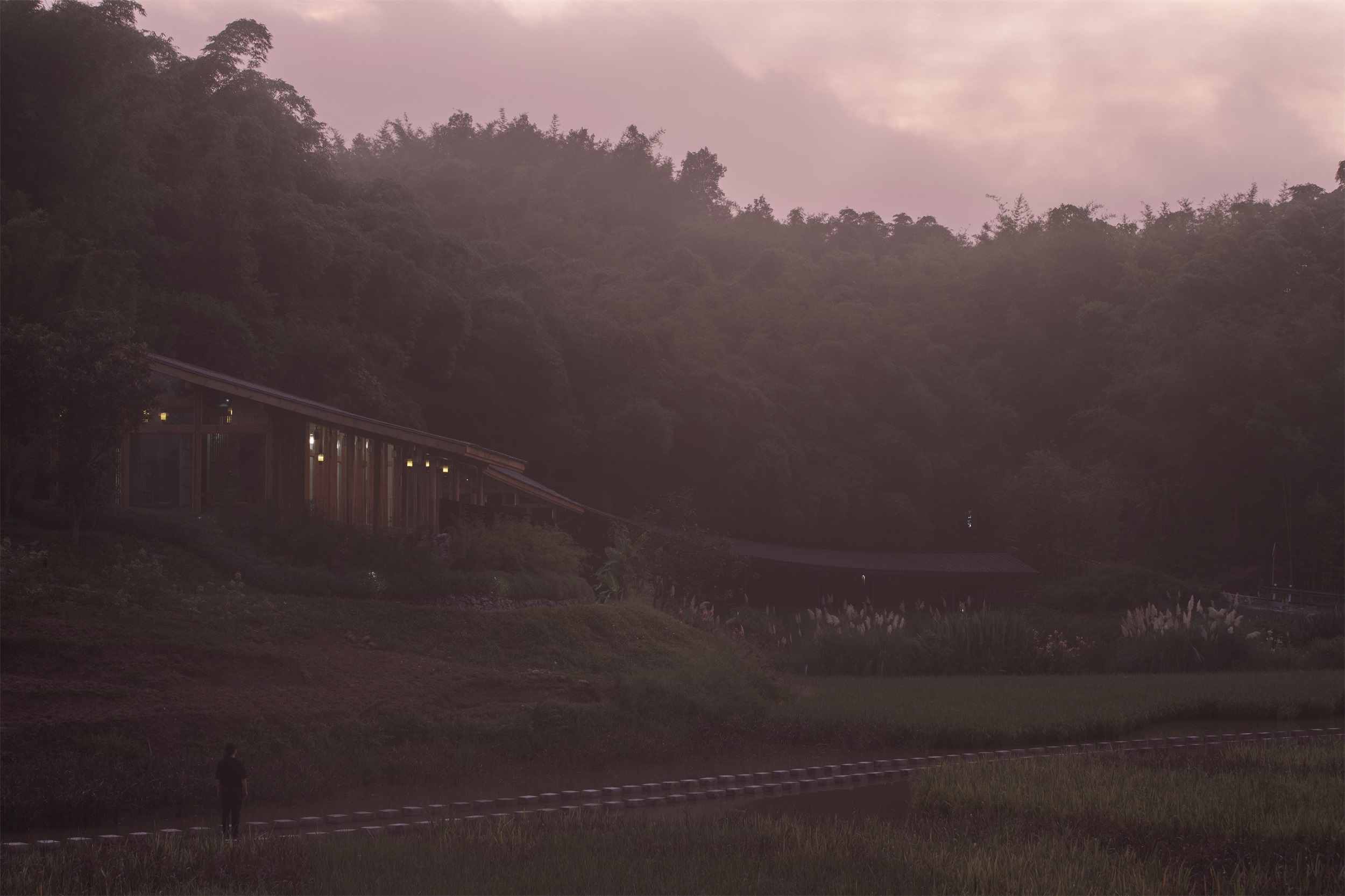 The undulating grayish blue tiled roof, the embodiment of the image that the “house is surrounded,” is compatible with the “hills covered with bamboo forests” in the vicinity, and a response to the requirements of local people for “prosperity of the new and the old.” The relocation and integration of plantain trees, bamboo groves and farm paths endow Bamboo Branch Academy with a gentle heart, which, as a new member, is once again embraced by the village! 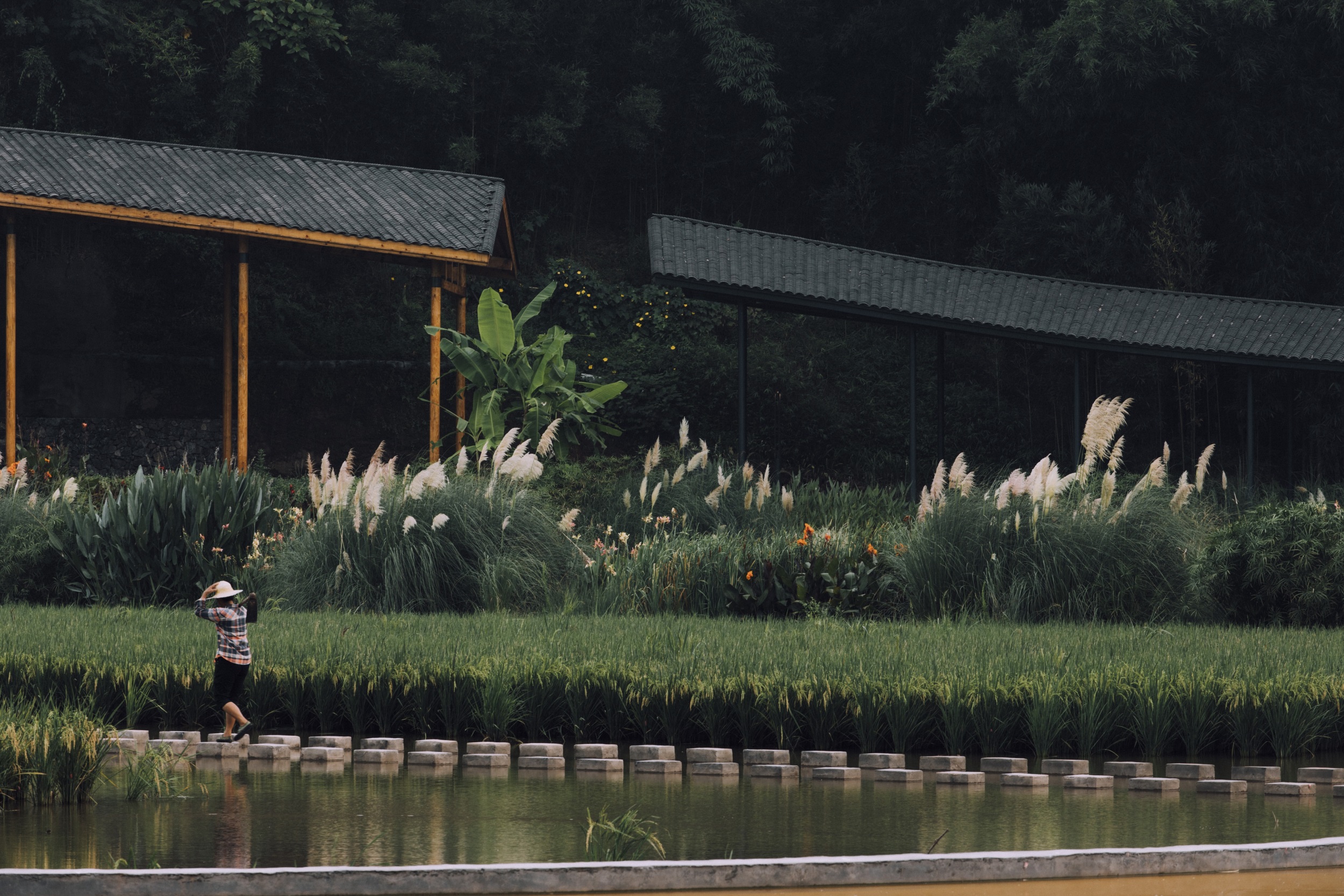 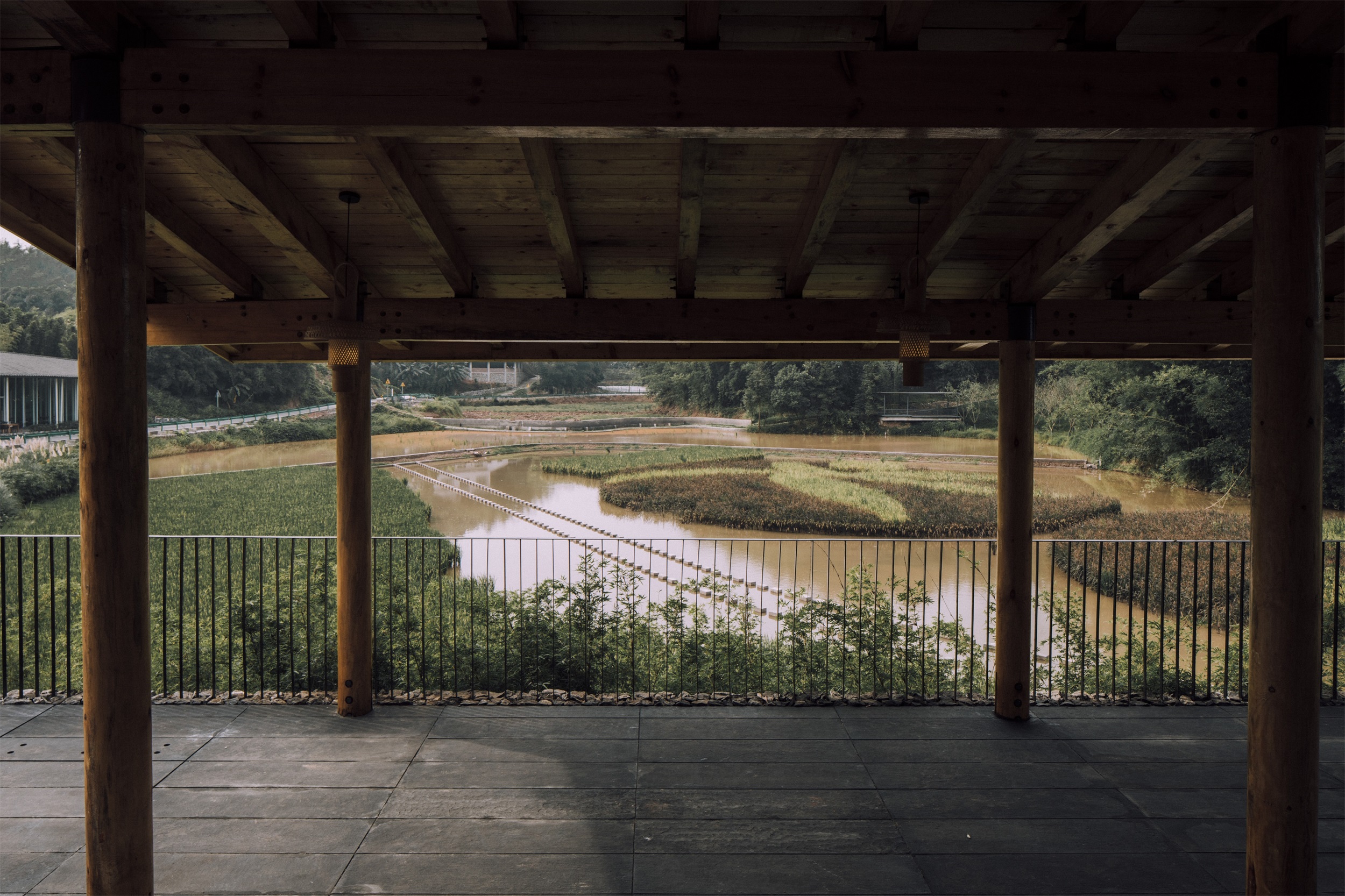 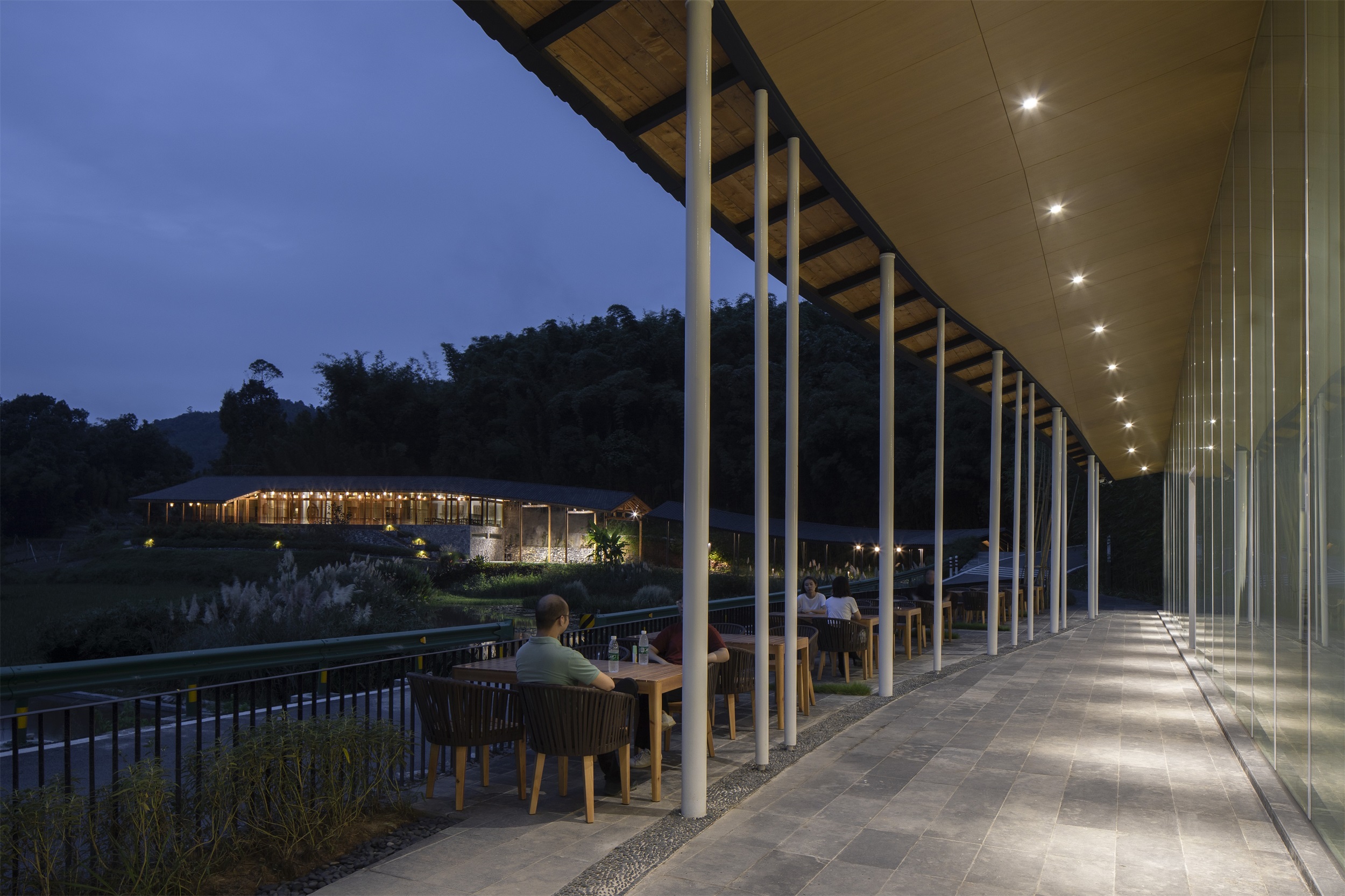 Bamboo Branch Academy is expected to shape the scenery of and add “poetic and pictorial splendor” to Yongjiang Village, Yibin. 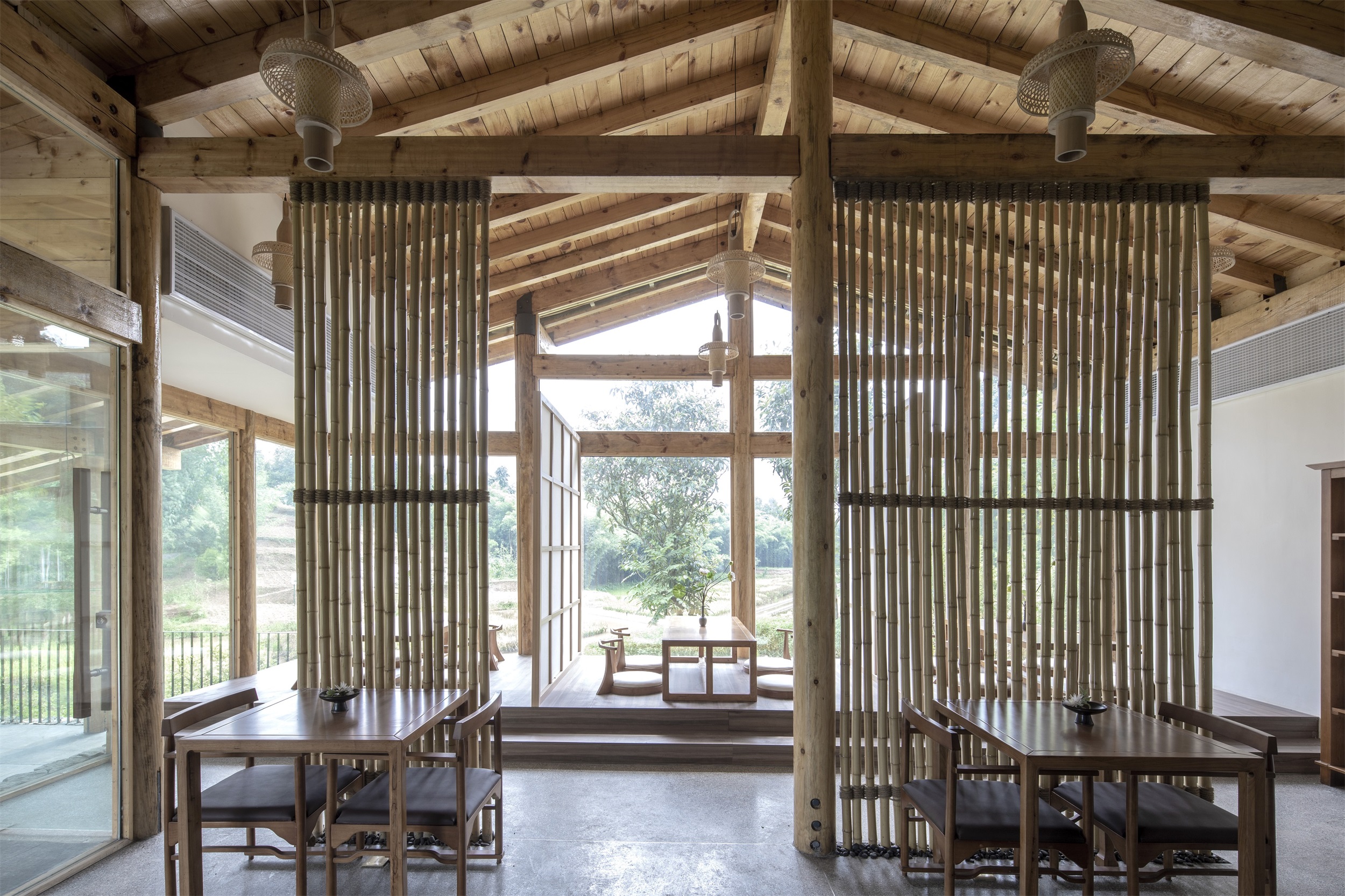 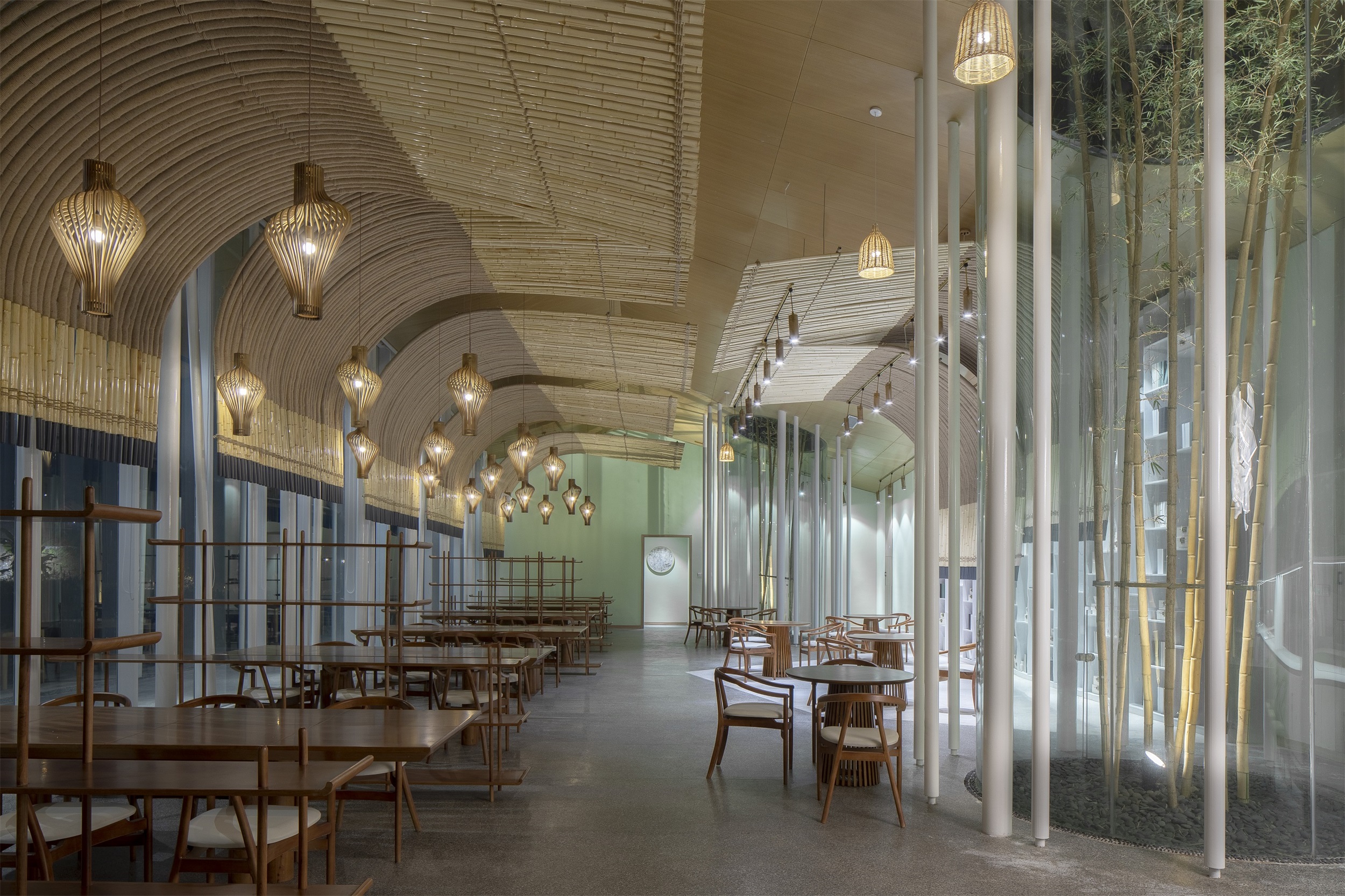 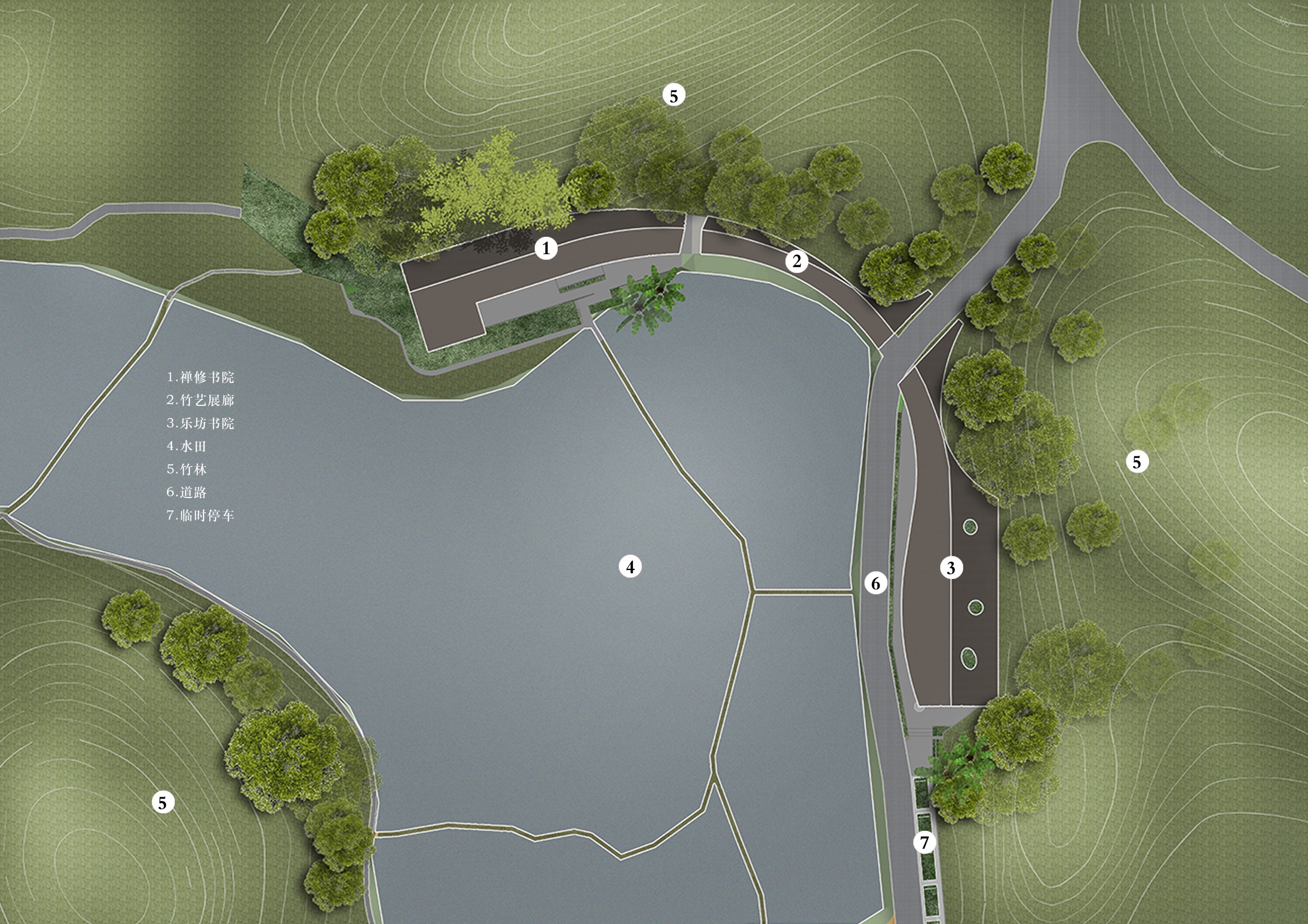 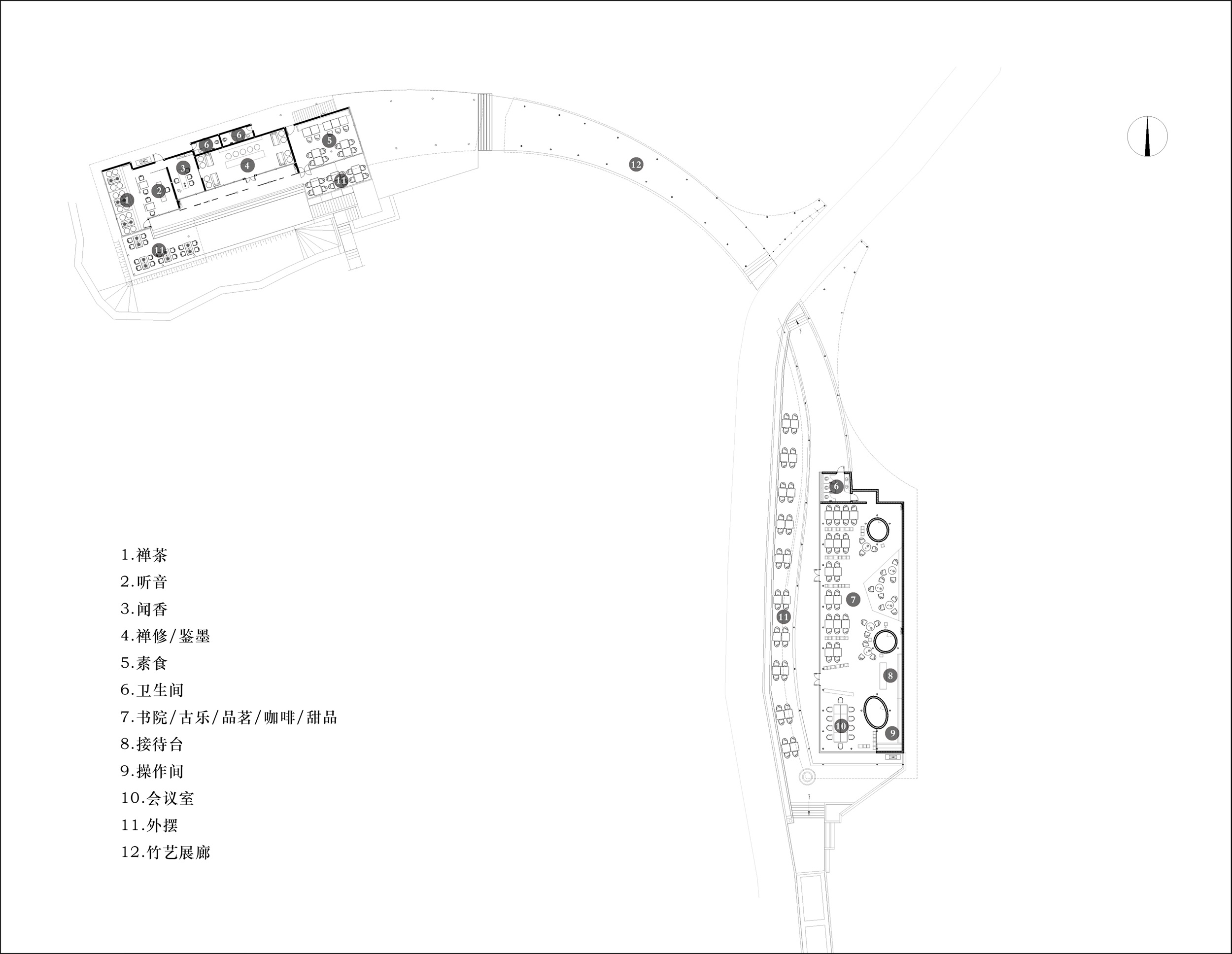 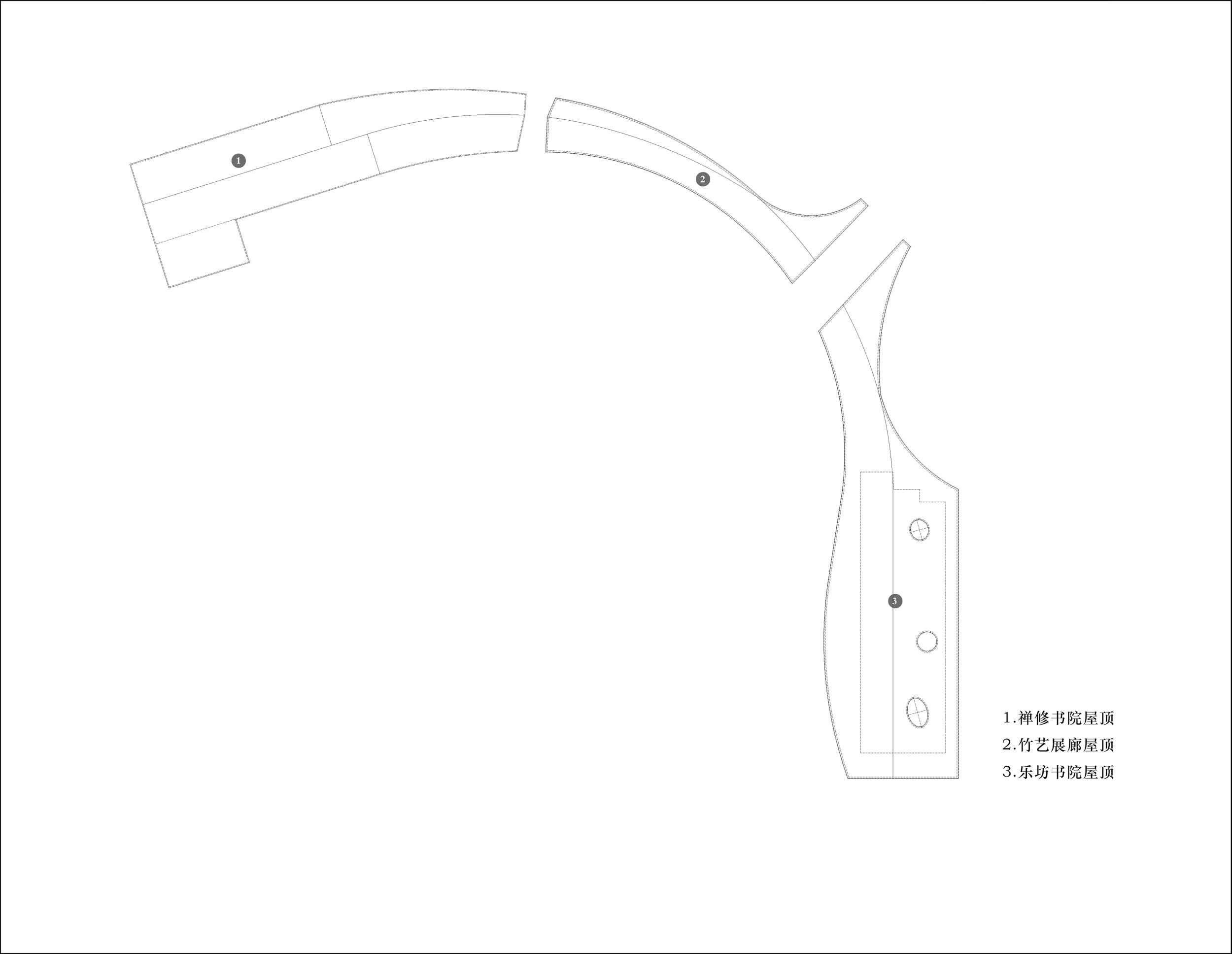 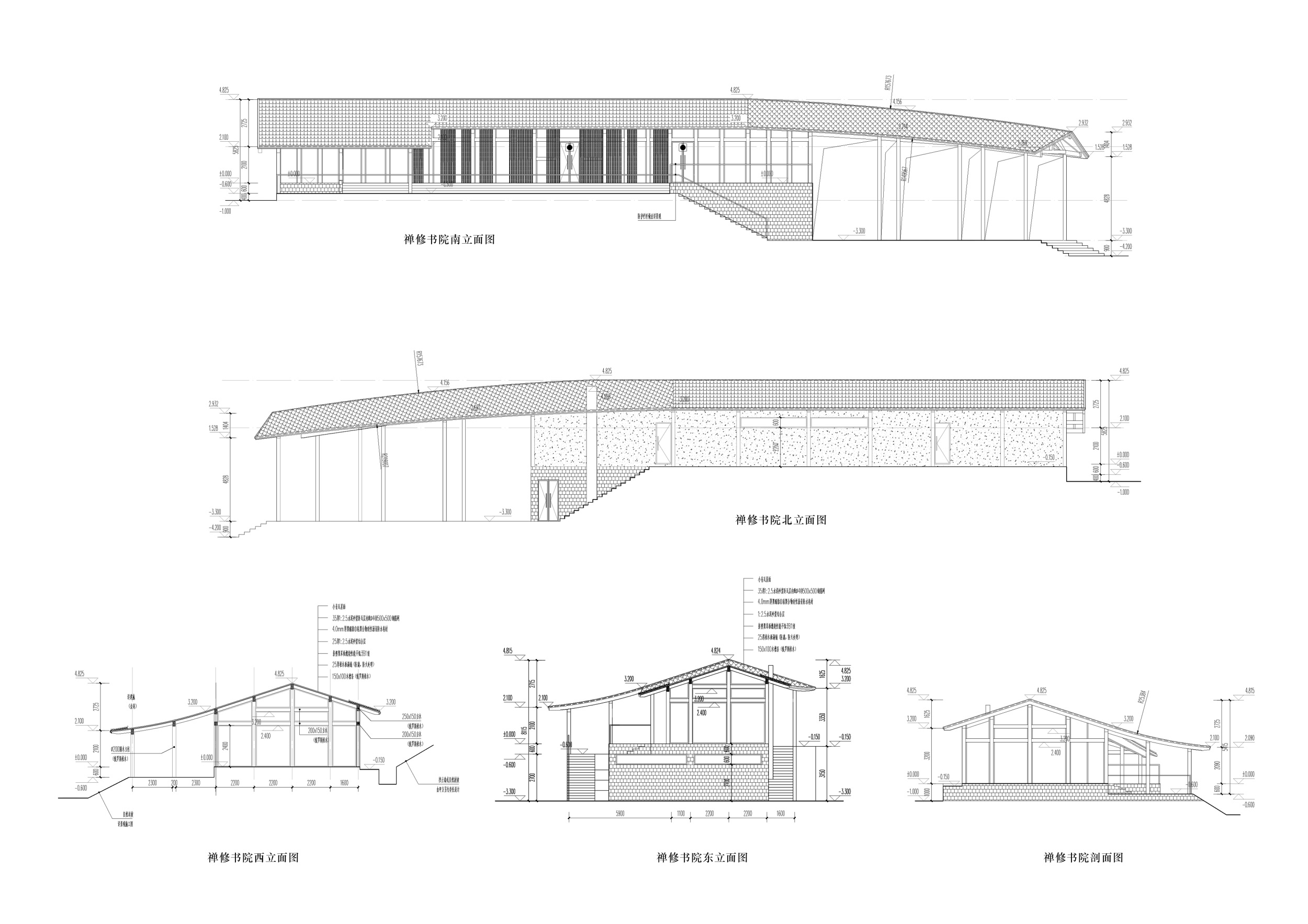 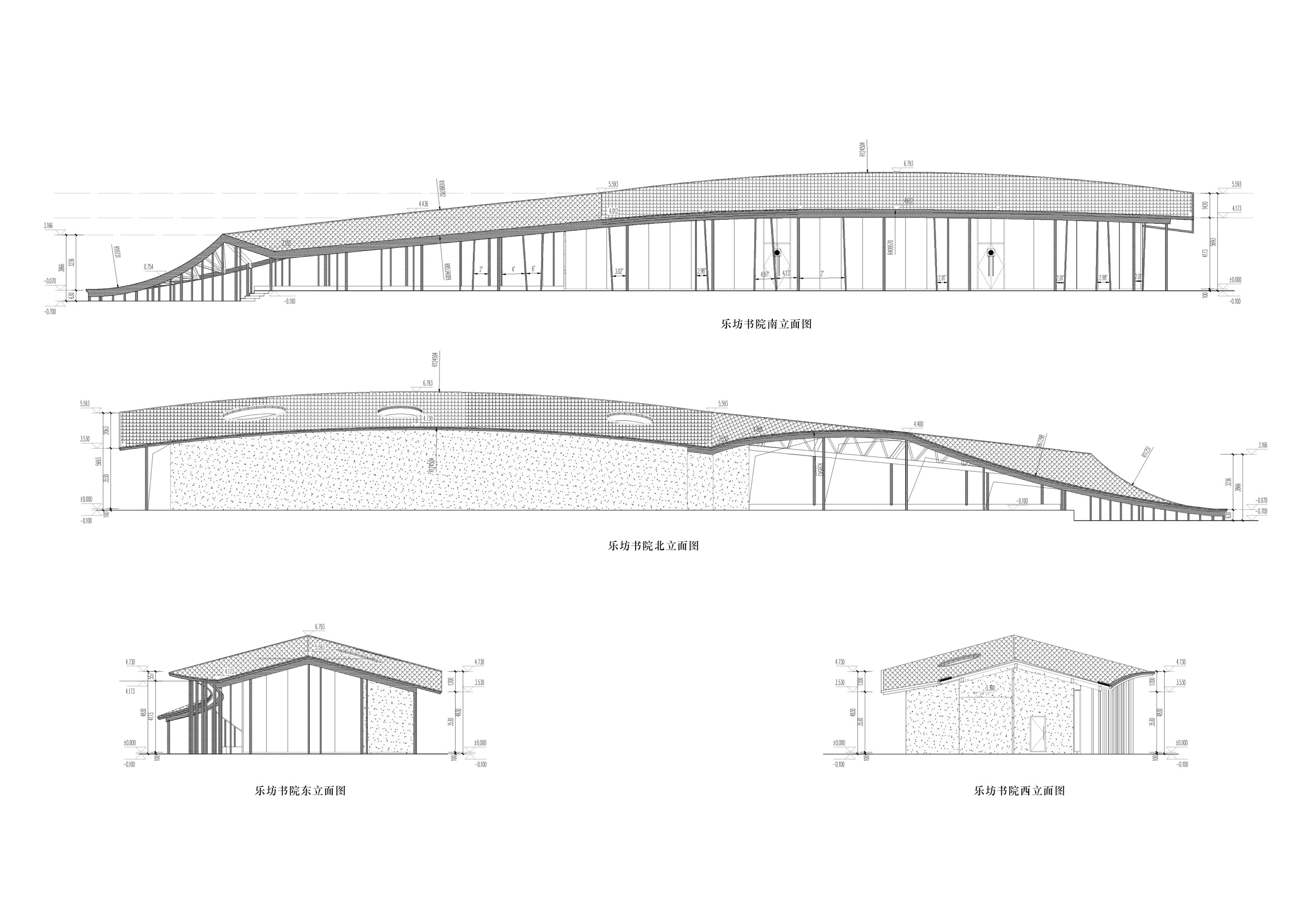 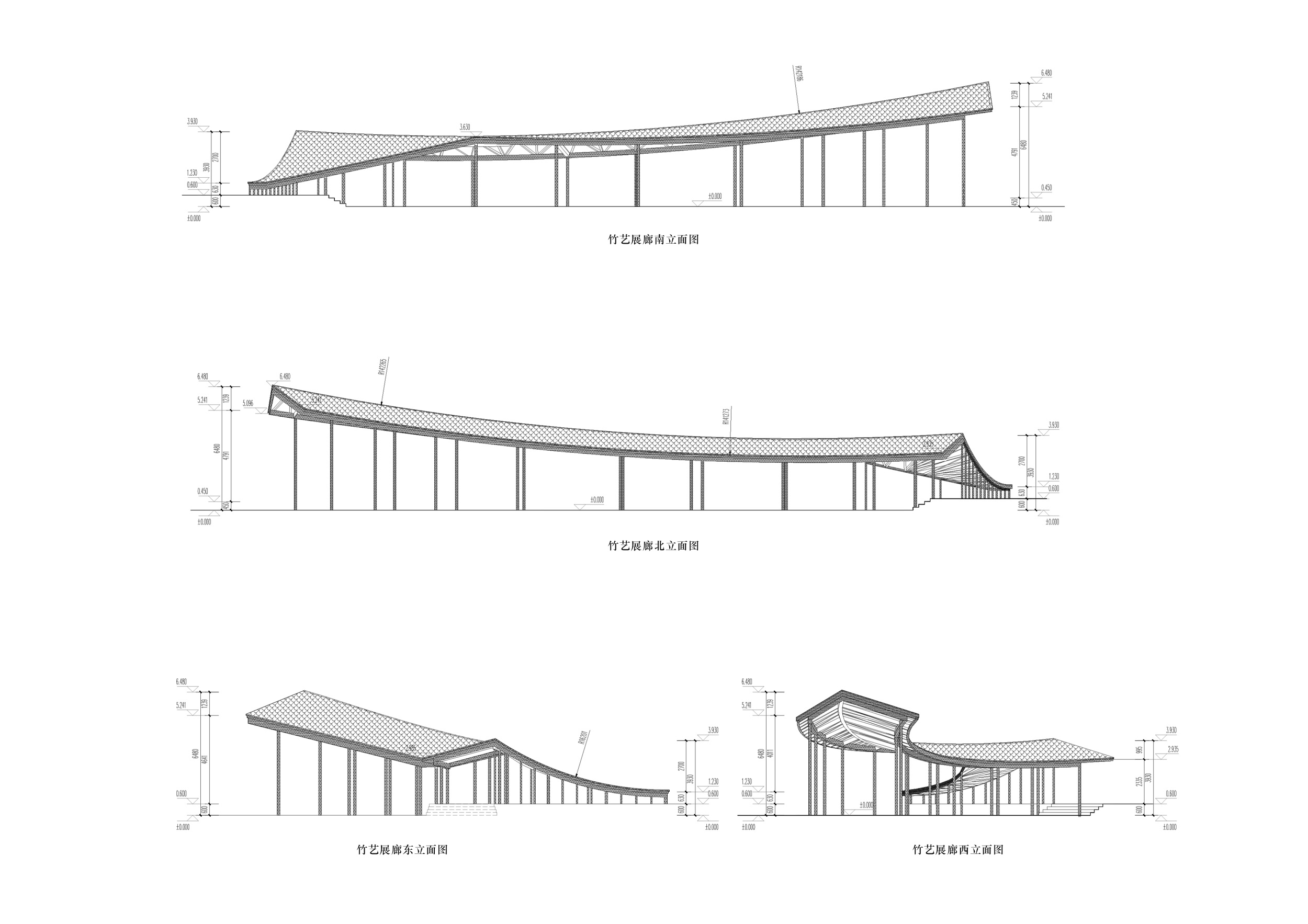 Imagery is spiritual image generated after mental activities of a creator. It is the basic unit of mental activity and the tool and element of thinking [1].