UP+S：Chizhou, one of the first group of sponge pilot cities, is rich in water resources. As a small and medium-sized city along the Yangtze River, it has many obvious problems caused by urbanization, such as waterlogging, accumulated water and saturated development. In 2015, Chizhou designated a central city region with an area of 18.5 square kilometers as a demonstration area, and started 117 sponge city construction projects, of which only 8 were park renovation projects, and Chizhou Moat Ruins Park was one of them. 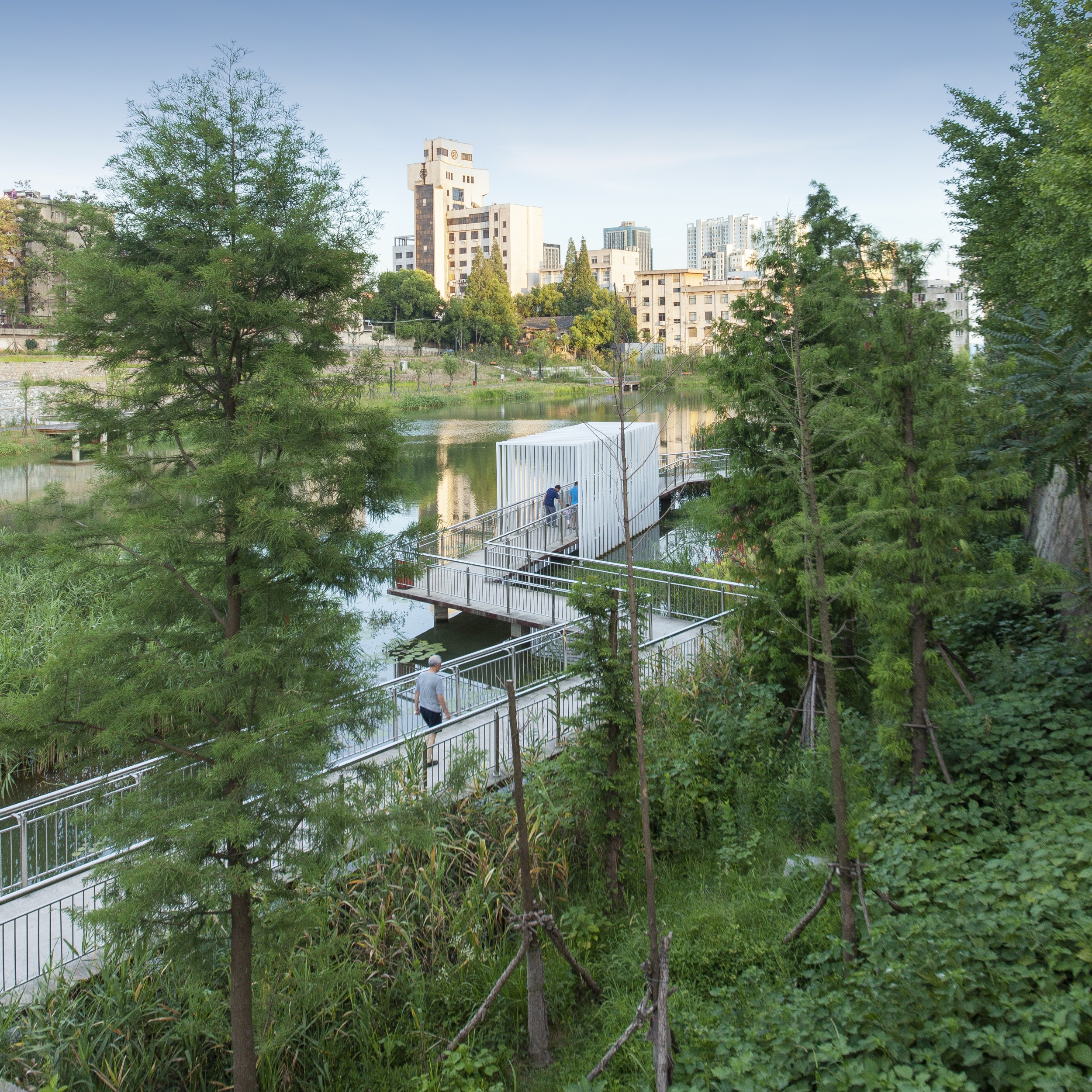 In the renovation and reconstruction project, a method for treating both sponge city and polluted river is comprehensively used to transform an “urban enclave” into a constructed wetland park with daily natural features, and the original polluted and malodorous water body into a water-engaging open space with a stable water quality of Class IV all the year round. It has made an exemplary attempt on the topic of black and malodorous water treatment in the city center.

This project is adjacent to the Second People’s Hospital of Chizhou City in the west, Qiupu West Road in the south, the Army Courtyard in the east, and the dormitory area of Xinhua Bookstore in the north, and it is at the low elevation of this region. The area within the red line is about 3.5ha, and the area of surrounding foreign water is 4.7ha. The place where the project is located belongs to the old city with high-density development, which has a combined sewer system. The water body in the project area was originally a pond left by the abandoned moat, which was also one of the ten polluted and malodorous water bodies in Chizhou. The import of a large amount of discretely-discharged waste water from the surrounding area had resulted in a harsh environment in this place. Additionally, there is a problem of water accumulation in the north community all the year round.

▼场地原貌 The original appearance of the venue

Tight enclosure of the whole site by hospital’s fences, dormitories, illegal buildings, etc., as well as the huge height difference between the pond and the municipal elevation, formed the initial impression of the site as inaccessible. Although it is located in the downtown area, it is actually an “enclave” known by people. Firstly, we began to think about whether we could turn this small place into a water-engaging open space with daily natural features, which could be accessed and used easily every day, thus turning a negative space into a positive and participatory space. Secondly, we also thought how to improve water quality, build a sponge-like constructed wetland, and solve the problem of rain and flood management in the area.

Firstly, for the overflow pollution problem caused by peripheral combined sewer system, the sewage interception project and the combined sewer overflow storage tank have been constructed, which have finally realized the direct discharge of sewage of the community in dry season;

Secondly, measures such as construction of rainwater garden and biological retention zone have been taken to control the water runoff in the park, as well as the foreign water runoff from the peripheral area;

Thirdly, the ecological revetment and water ecosystem have been constructed, and the owners have been invited during the constructing period to determine the species and quantity of animals and plants in the water; and the purifying wetland has been constructed to form a self-cleaning internal circulation system of the lake, thus to ensure that the water quality of the lake meets the requirements of class IV water for a long time;

Additionally, drainage facilities, such as drainage channel and cover ditch, have been built to assemble the surrounding rainwater into the lake for storage, which can not only meet the flood prevention requirements of the surrounding area against the rainstorm with a probability of once every 30 years, but also solve the waterlogging problem of the community in the north.

The main entrance of the park, located on Qiupu West Road in the south, has limited dimension due to the restriction that the facilities on the east side of the entrance cannot be relocated. Under this restriction, the effort will be maximized as far as possible to create an “empty” square, thus making the heritage park open its arms and embrace the citizens to explore this modified enclave in the city. The big tree planted in a row defines the boundary between the park and the city. The LOGO landscape wall and seats arranged sporadically are separated on both sides, and the step-style water falling landscape is arranged immediately behind the entrance, the water in which runs all the way down to the floating square. 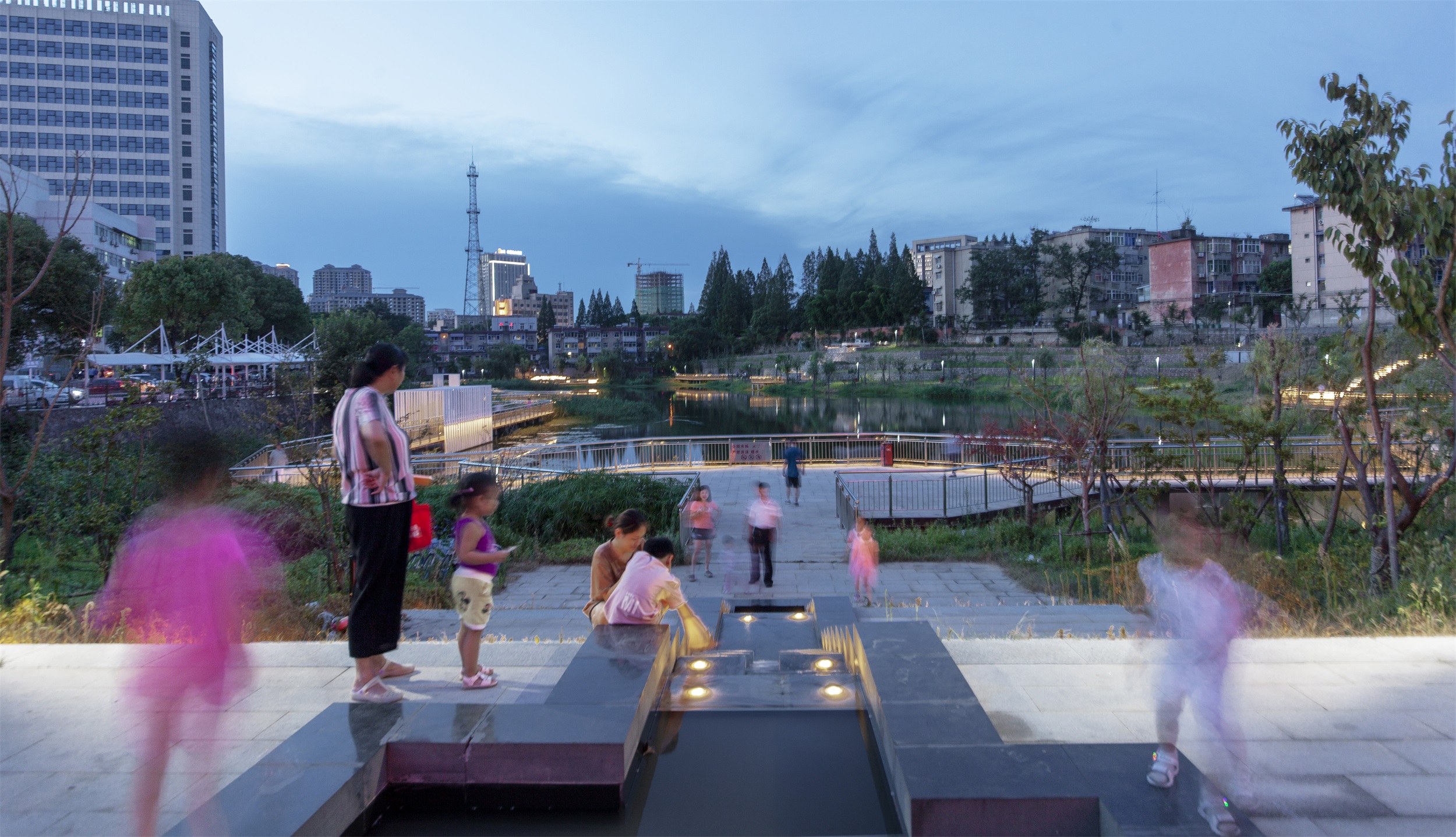 As it is viewed on the floating square into a distance, a circular trail floating above the water runs through the whole water edge. Because of the height difference between the water body and the city, most of the space is below the surrounding. Metasequoia maintained and other plants newly planted on the site form a green barrier interface, which temporarily separates the whole water surface space from the outside world. The trail shuttles along the shore, in the water and among the plants, with different views in different locations. Post-dinner walk in the park could refresh you with the breeze and the natural frogs croaking sound, as well as the star lights interspersed overhead. People could enjoy the relaxation physically and mentally even if they have exposed to such a natural environment shortly in their daily lives.

▼日常易于到达的滨水活动空间 Waterfront activity space that is easy to reach daily The vertical revetment between the existing hospital and the water body on the west side is just like a vertical crack that interrupts the continuation of the green basement. In order to form a water-engaging loop, emergent aquatic plants and green island are used to realize the green connection on the west side of the park. The water-engaging trail is independent of the revetment, winding in the plants, creating ecological poetry of constructed wetland together with the intermittent resting terraces and simple white porch. The winding walk trail makes people slow down; the plants with different heights on both sides bring people different visual impressions; and the white corridor creates the changes in light and shadow during the day, and is also the focus of attention on the shore during the night. Occasionally, people fish on the water platform, and they can also have some daily gains.

▼西侧绿色连廊 Green corridor on the west side 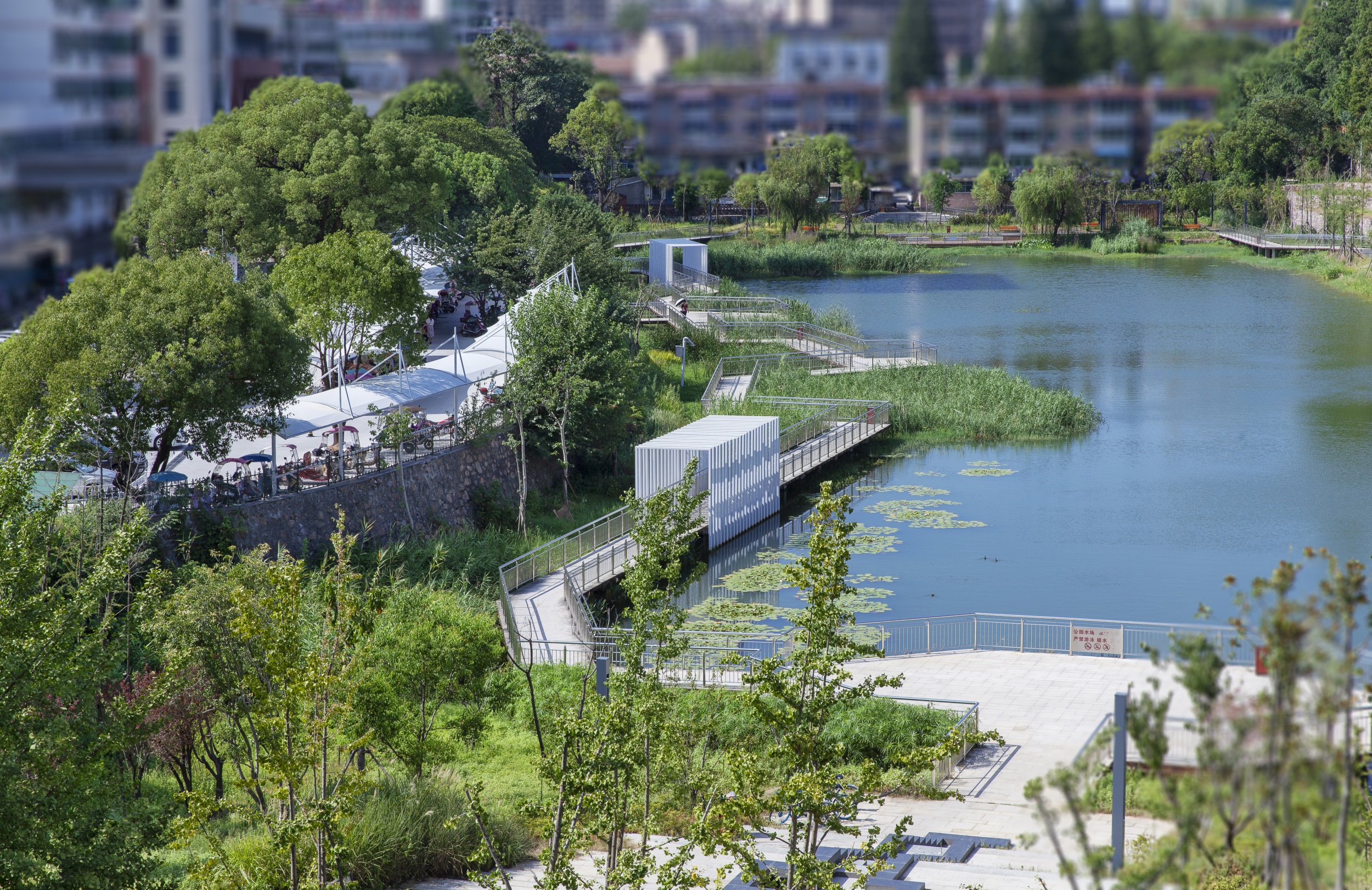 ▼西侧亲水步道独立于驳岸之外，蜿蜒于植物中 The water walkway on the west side is independent of the revetment, meandering among the plants 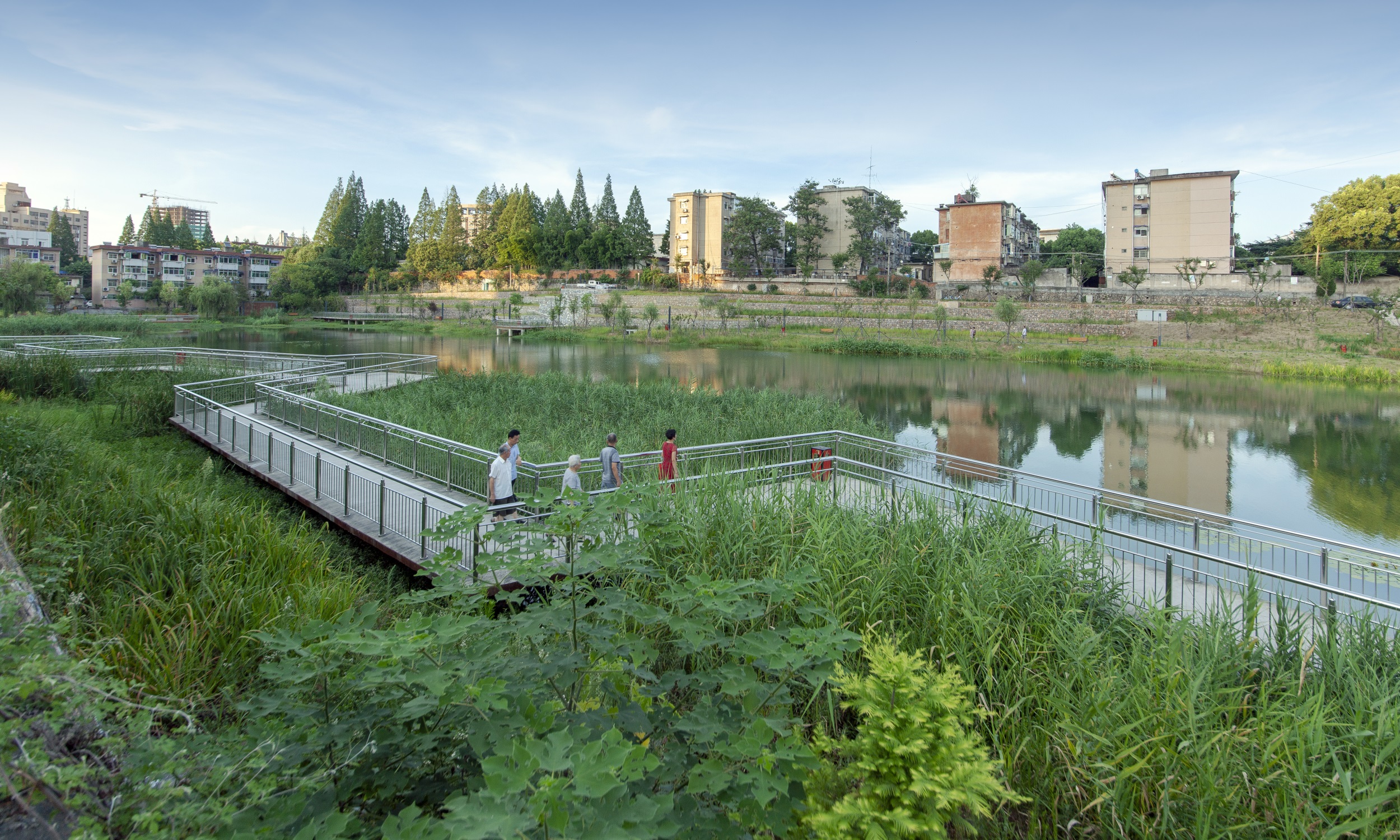 The entrance connecting the dormitory of Xinhua Bookstore on the north side has been maintained for the convenience of residents. People would face the outstanding platform after passing through the entrance, on which they could view the whole place as their own back garden. This small space connected with the dormitory of Xinhua Bookstores has some vegetable fields of residents before renovation. During the renovation, residents’ usage habits are respected, and the space is reserved, so that they can continue to use this place in their favorite way.

▼北侧出挑的平台 Overhanging platform on the north side

The space on the east side of the park is narrow, and the landscape platform designed to solve the height difference also has the function of primary purification of road rainwater. The soil in the platform is designed with specific substrate according to the water quality of Chizhou. Before the renovation, there are many illegal buildings in the east side. After the illegal buildings were dismantled, the secondary entrance of the park was set in combination with the platform to increase the accessibility of the park. In the platform, there are also some secret spaces waiting to be explored and excavated, which are suitable for meditation or having one’s mind rest. 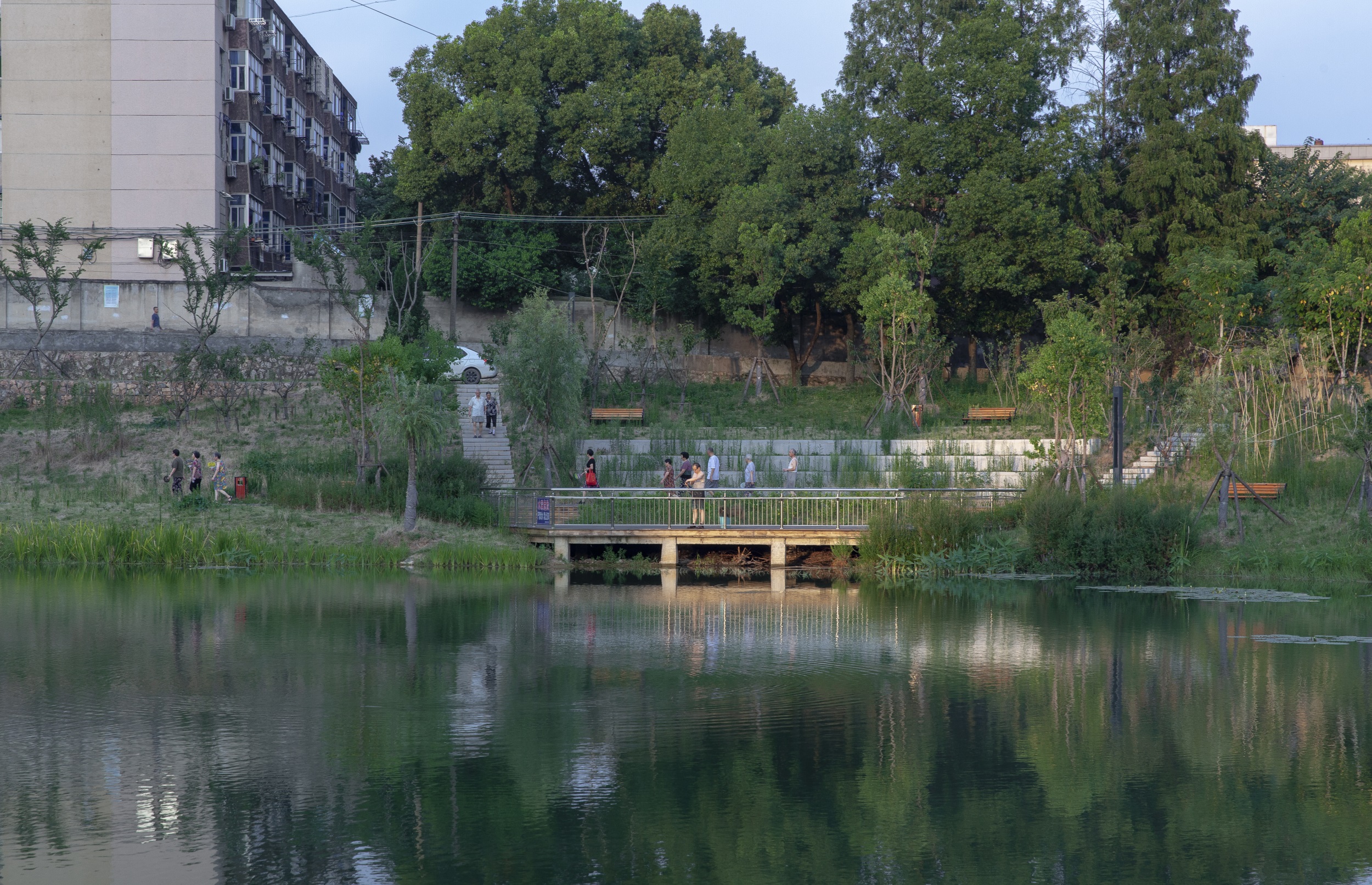 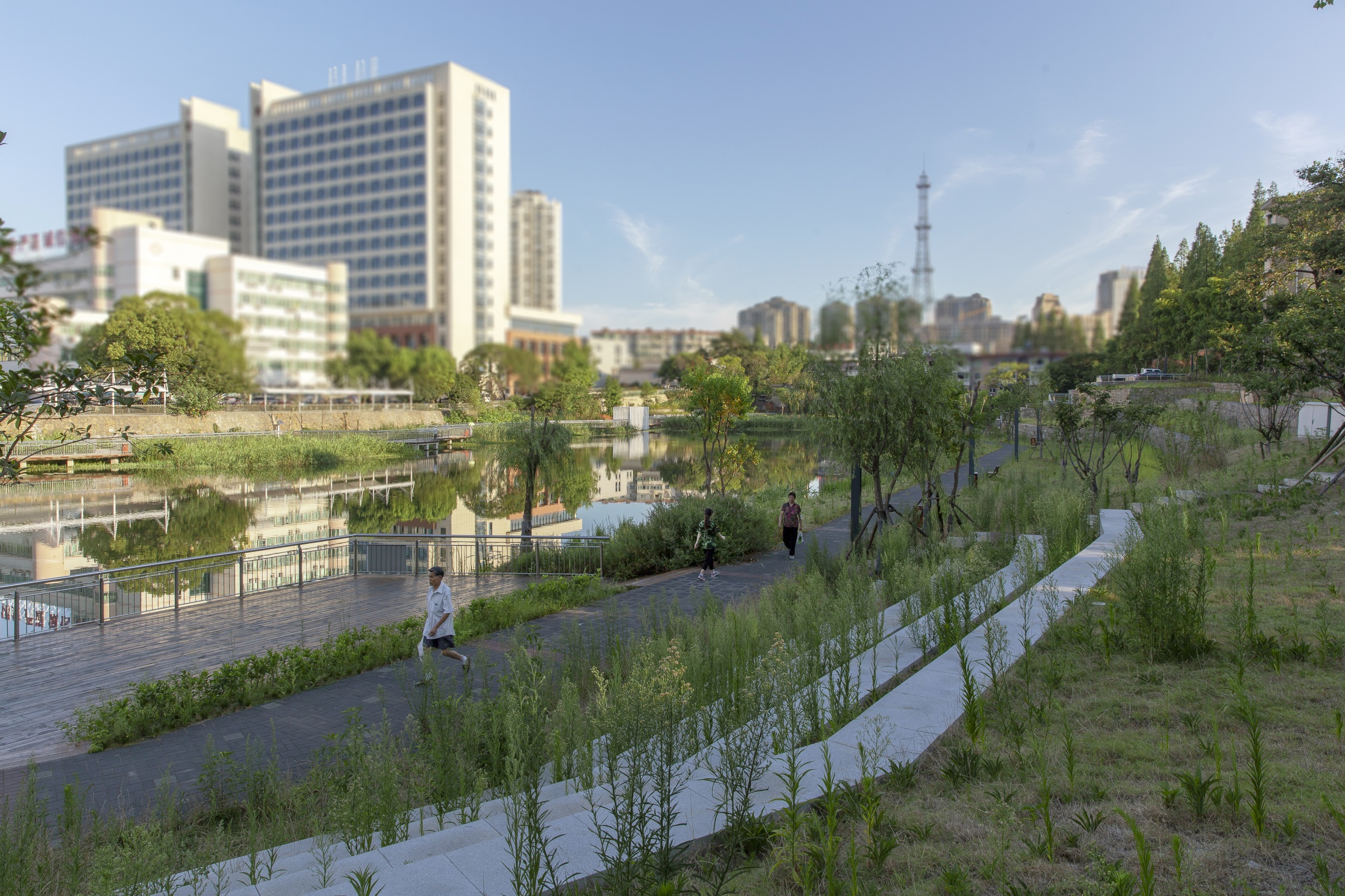 ▼台地旁边是亲水步道，营造漫步水岸边的感觉 Next to the terrace is a water trail, creating the feeling of walking along the water bank 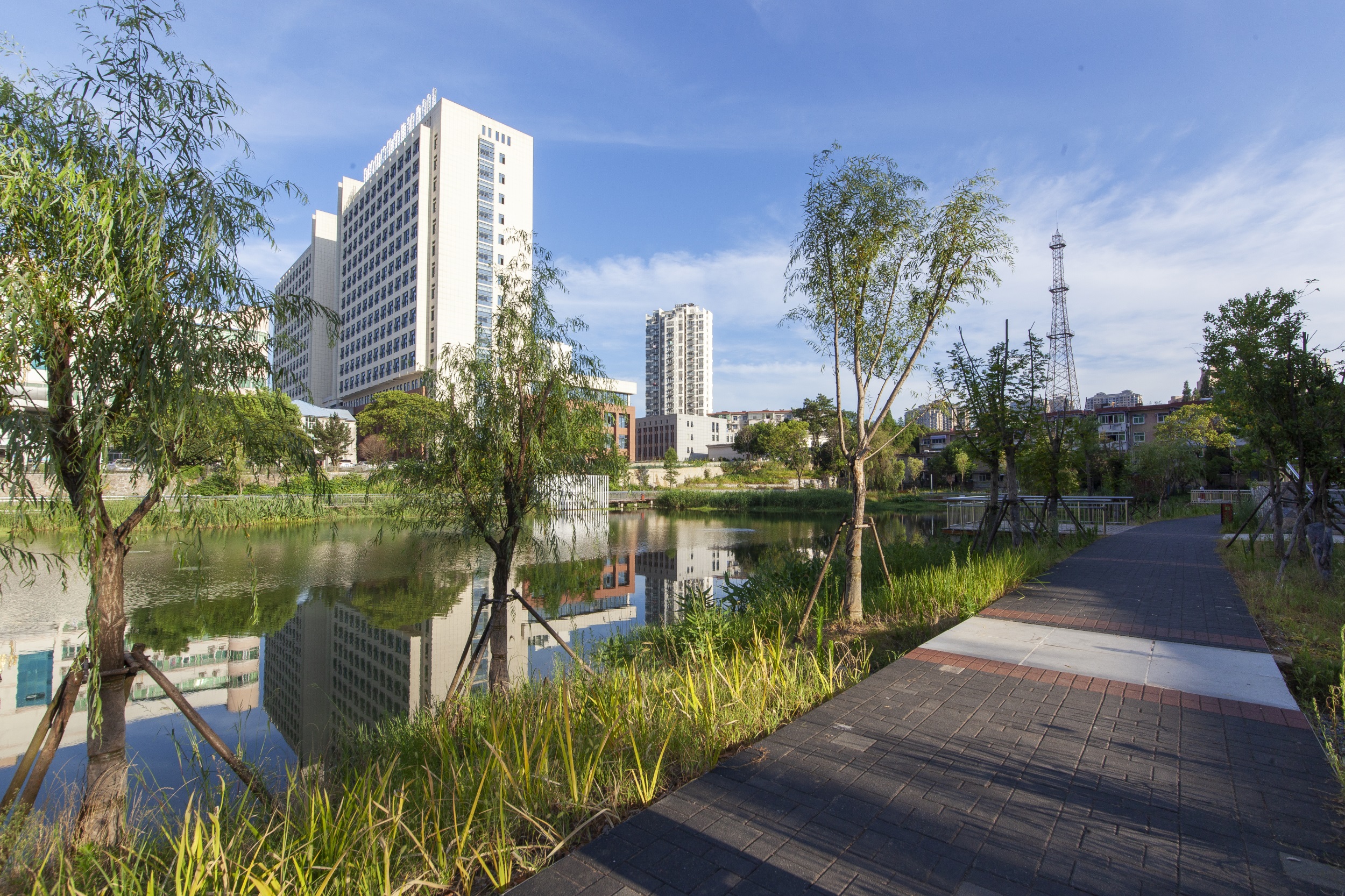 For the overall water environment renovation of the project, the consideration has been made to the whole catchment area, in order to give full play to the advantages of green space, and make overall plans to optimize the polluted and malodorous water control and the sponge construction. The management and control mode of “Source + Midway + Terminal” has been adopted, to make overall plans for construction of the above-ground and underground spaces, make more use of the environment-friendly measures, properly assist the solution of pollution problems, and finally achieve the goal of 85% annual total runoff control, with a pollution load reduction rate of more than 84% (calculated by CODcr). After renovation and modification, the park has become an accessible waterfront activity space, effectively increasing the regional vitality and upgrading the environment of the old city, and providing a venue for ecological education in the urban area. Polluted and malodorous water body has met the standard of stable Class IV. By restoring lake habitat and improving the diversity of plant communities and animals, the lake has become an important habitat for wild birds such as wild ducks and egrets. It is a very beneficial attempt to transform the polluted and malodorous water body into a constructed wetland park with daily natural features. Compared with the wetland park in the suburbs where you need to drive, the place with such daily natural features that can be accessible after meals is more precious for people. 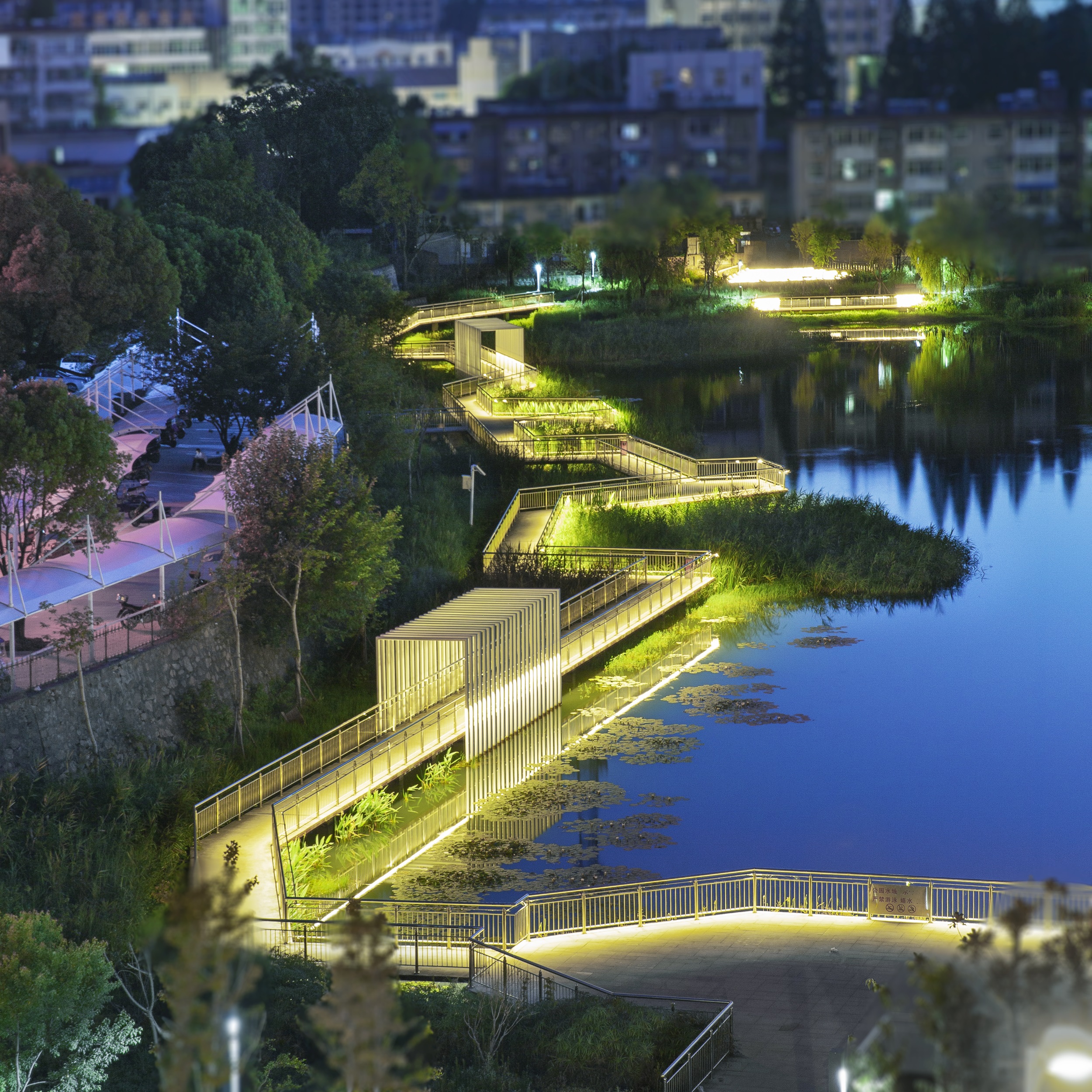 With the highest score in the Urban Planning and Landscape Design Category of NOVUM DESIGN AWARD 2021, the project has won the GOLDEN award, and has been selected as the only winner of the SUSTAINABLE DESIGN OF THE YEAR.